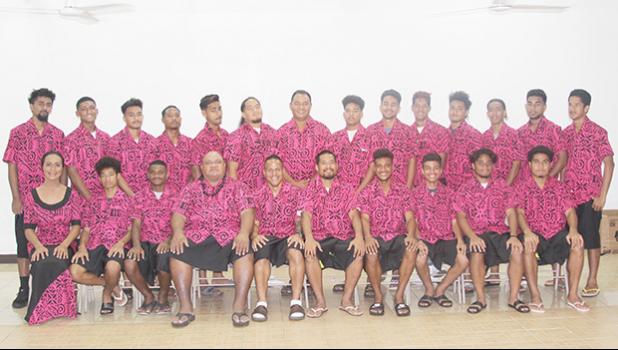 Pago Pago, AMERICAN SAMOA — American Samoa’s men’s National Team is ready and geared up to play in the 2019 Pacific Games Samoa with a squad of 21 players.

There are only four players that have been capped previously with the National team, goalkeeper and elder statesman Nicky Salapu, defenders Jaiyah Saelua, Ryan Samuelu and Uasilaa Heleta.  The rest of the squad are young, with some of them making the leap from being youth international players to the senior men’s team.

Coaching the team is Tunoa Lui, and he is assisted by Travis Sinapati and Talalelei Faalavaau.  FFAS Technical Director is the technical advisor for the team during the competition held in Samoa from July 8-20, 2019.  Silasila Samuelu is the team’s manager, assisted by Tavita Taumua and equipment curator, Christopher Taimovai.

Leading the youth surge on the senior team are Roy Ledoux, Walter Pati and Milo Tiatia, three players capped more than 10 times each in youth international competitions (U20 & U17).  The team has a few players with OFC Champions League qualifiers experience — Christopher Taimovai, Ueligitone Tualaulelei, Palauni Tapusoa, Puni Samuelu and Hengihengi Ikuvalu, and they too have youth international games under their belts.

Some other players making the leap to the National Team for the first time but with U20 or U17 experience are MJ Faoa-Danielson, Takai Pouli, Kuresa Tagai, Austin Kaleopa, Kuresa Tagai and his younger twin brothers, Mark and Mathew.

Junior Teoni and King Moe are the only two players making their first appearance in any national team.

“We are hoping for a great tournament and believe the boys will perform well for their country, their families and themselves,” said the team’s coach, Tunoa Lui.

American Samoa is in a pool of six teams, while the other pool has five teams, the two best national teams advancing to play in the gold medal, while the second-best squads in each bracket play for the bronze.

“The executive committee and I have given the management, players and coaches our blessings for their upcoming competition,” said Sen. Faiivae Iuli Alex Godinet, FFAS president.  “I know it’s a very young team, but I believe they will play with a lot of heart and make American Samoa proud out there.”

The men’s schedule is as follows:

The men’s team will return home on July 19, arriving back on July 18.

The American Samoa Men’s National Team for the 2019 Pacific Games squad are: