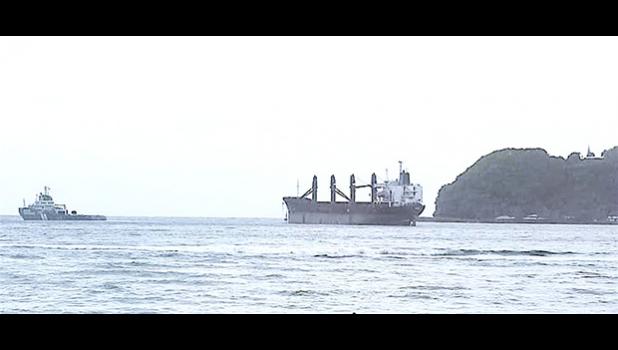 Pago Pago, AMERICAN SAMOA — Off island news outlets were abuzz yesterday afternoon, reporting that the Wise Honest — which has been docked in American Samoa waters since the earlier part of this year — had been sold for scrap metal and was being towed away from American Samoa.

Samoa News contacted Lt. Ryan Junod, head of the local Marine Safety Detachment Office for the US Coast Guard, who confirmed that the North Korean cargo ship was being towed by a tugboat and on its way out of the harbor. This was around 2p.m. yesterday.

By 3:30p.m - Samoa News was getting phone calls about it departure. One caller noted, “I’m having a beer on the beach, celebrating — finally it’s been towed away from my beautiful island!”

The Wise Honest has been the talk of the town since it arrived four months ago. Local residents, as well as government officials, have been vocal about their concerns of having the ship dock in local waters, citing possible retaliation by the North Korean government.

The vessel arrived here in mid-May after it was seized in April by the United States in Indonesia, and towed to the territory for reported violations of UN sanctions. The Justice Department had indicated that the vessel was used to illicitly ship coal and deliver heavy machinery to North Korea.

The case of the Wise Honest made history as, according to the South China Morning Post, it was the first time the United States seized a ‘sanctions-busting’ North Korean ship. In July this year, the vessel was auctioned off by the federal government in connection with a federal court ruling in New York City.

As of Sept. 5, 2019, according to Port Administration director Taimalelagi Dr. Claire Poumele, the American Samoa Government received $46,000 in port services and fees imposed on the Wise Honest.

Lt. Junod explained that it was the US Department of Justice who took the lead in the towing of the Wise Honest, and the local USCG’s involvement centered around the safety and security of the port, the environment, and of course, the safety of community members.

The USCG is expected to release today an official statement.