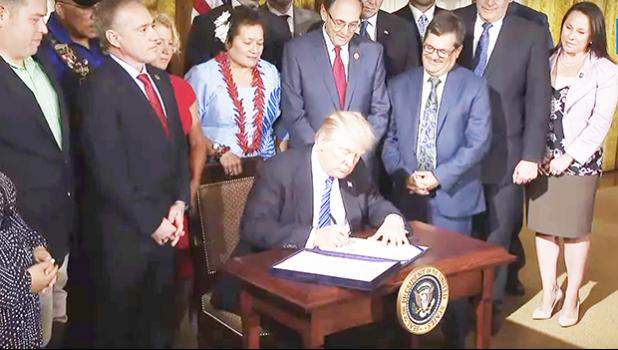 As a Member of the House Veterans Affairs Committee, and an original cosponsor of the House version of the landmark legislation, Congresswoman Amata was invited to attend along with other Congressional and federal leaders.

“I want to thank the President for his actions today.  Both the President and Secretary Shulkin are leading our nation in reforming the Department of Veterans Affairs,” said Amata.  “I was pleased to be an original sponsor of the House version of the bill.  As we, all know the VA has been plagued in recent years with controversy and poor performance.  This bill will introduce reforms to the Department, and will protect employees of the Department who report wrong doing,” continued Amata.

“My colleagues in the House of Representatives and the Senate will continue to fight for our veterans, to ensure that the VA is providing the best care possible.  I want to thank President Trump and Secretary Shulkin once again for their leadership; and I look forward to continuing to work with them both to bring much needed changes to the VA,” concluded Amata.