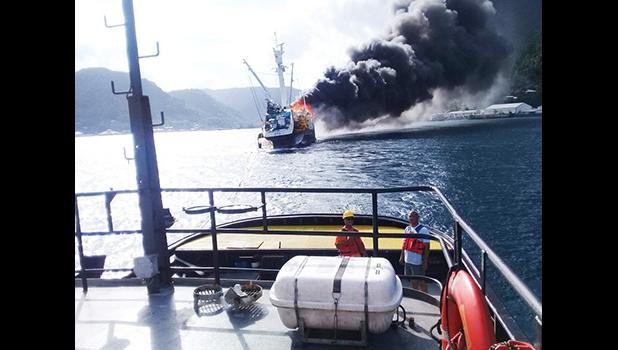 Pago Pago, AMERICAN SAMOA — Federal investigators found “several issues” that contributed to the fire and its spread onboard the US flagged fishing vessel Jeanette last December at the Port of Pago Pago, and among the issues is the “ineffective response” by the vessel’s crew, according to the US National Transportation Safety Board (NTSB) report publicly released Tuesday.

NTSB “determines that the probable cause of the fire and sinking of the fishing vessel Jeanette was inadequate crew training and oversight by the company to ensure safe hot work practices were followed on board the vessel,” the report said.  (See yesterday’s Samoa News edition for details).

The report, in which the NTSB worked closely with the local US Coast Guard Marine Safety Detachment Unit to carry out the investigation, also provided other information as well as an analysis of the incident.

NTSB explained that the US Occupational Safety and Health Administration (OSHA) provides standards for safely conducting hot work, which require a fire watch to be posted when crew members are conducting hot work in areas close enough to cause ignition through heat radiation.

As per OSHA, a fire watch is considered to be the primary means to protect crew members and the vessel from harm during hot work, it says.

OSHA states that an effective fire watch should wet down the area or cover combustible material with fire-resistant blankets while maintaining a clear view of and access to areas of hot work.

Additionally, the fire watch should not perform any other duties while acting as fire watch and must remain on-site for at least 30 minutes after crew members have completed hot work, unless relieved by a crew member or the area is determined to be safe.

According to NTSB, investigators found several issues that contributed to the fire and its growth, including insufficient preparation for hot work and inadequate implementation of a fire watch.

“In addition, the disorderly response by the crew to the fire indicated that the crew was not prepared for an emergency situation,” it says, noting that investigators found that the vessel had no written safety policy or procedure in place for the crew to review and follow when preparing for and conducting hot work.

(“Hot work” —  includes any work that involves using fire or spark-producing tools, according to the report.)

The crew members, according to the report,  were welding the overhead adjacent to a space containing charcoal and paper goods, which presented a substantial fire risk. “They either were unaware of or did not understand their responsibilities to assess the risk of fire and take steps to mitigate or remove it,” it says.

Under OSHA policy, the NTSB said, there should have been two crew members serving as fire watch — one on the wet deck and one on the main deck. However, there was only one fire watch on the day of the incident.

Because there was only one fire watch assigned to monitor both the wet deck and the main deck during the hot work, the fire watch could not effectively monitor both decks, said NTBS, which also notes that the fire watch was assisting the welders by chipping paint and preparing the surface, when he should have been focused solely on preventing and detecting a fire.

Further, the welding crew and fire watch left immediately for lunch instead of ensuring that the affected welding areas were safe and that there was no potential for a fire.

“The shortcomings of the crew in preparing for and monitoring hot work demonstrate a lack of understanding of the risk that hot work posed to the vessel,” the report points out. “All areas adjacent to the hot work should have been accessible.”

“If the vessel owner had provided the crew with a policy or formal training for conducting hot work, the crew likely would have been more aware of their responsibility to properly prepare and monitor the spaces adjacent to the location of hot work,” according to the report, which notes that the vessel is owned by San Diego based, C & F Fishing LTD.

“Contributing to the growth and spread of the fire was the ineffective response by the crew,” the report said.

It explained that without the senior officers on board providing leadership, and without a knowledgeable crew member designated as being the person in charge, “the crew did not respond effectively” to the emergency and failed to follow the fire muster procedure and properly utilize critical fire equipment, such as the fire suits and the self-contained breathing apparatus (SCBAs).

“This allowed the fire to spread to the point where it could not be contained, and the vessel became a hazard to the port,” it said.

In the report, NTSB explained that it has the authority to investigate and establish the probable cause of any major marine casualty or any marine casualty involving both public and nonpublic vessels under federal law.  However,  NTSB does not assign fault or blame for a marine casualty.