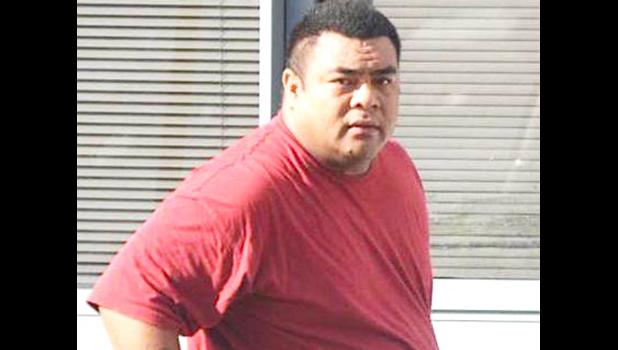 Pago Pago, AMERICAN SAMOA — A former DPS police officer who has been detained at the Fagaitua Police Substation (FPS) for over 2 months to await sentencing after pleading guilty to unlawful possession of a controlled substance, to wit; methamphetamine and stealing, both felonies, was remanded to the Territorial Correction Facility (TCF) last week, after suspicions that he allegedly used meth while detained at the East Substation surfaced.

Sources told Samoa News that Olataga Wilson, one of four defendants, all former police officers in the Juvenile Detention Center (JDC) was returned to the TCF last Thursday.

A prison guard who asked to remain anonymous confirmed to Samoa News last week that Wilson was transported back to TCF last Thursday. The guard did not offer any additional details as to why Wilson is now back to TCF.

A reliable source told Samoa News that Wilson was transferred to the FPS for safety reasons, and he was to remain there until further notice from DPS.

While at FPS, according to the source, since there is no cell at the FPS, Wilson used the front office to sleep and to stay with the police officer who was assigned to guard him.

“Most of the time during day and night, Wilson used the computer inside the office for personal use. If he felt tired he would just lay down on his bed beside the table where the computer is and he would sleep. If he was hungry, he went to the kitchen and cooked his food, he then came back to the front, ate his food and used the computer again,” the reliable source told Samoa News.

Due to the shortage of manpower, only two police officers are assigned to work each shift at the FPS, the source claims. However, one officer has to stay at the FPS to guard Wilson while the other officer has to work from the Fagatogo Central Police Station to serve all calls from the Eastside whenever police assistance is required.

According to the source, the Wilson matter was reported to a police supervisor when a female officer who was assigned to work at the FPS for the night shift on Sunday, July 29, 2018 allegedly noticed Wilson smoking something outside of the office in the parking lot, after the officer went outside looking for Wilson after the inmate had been gone from the office for almost an hour.

The source said, as soon as Wilson saw the female officer, he immediately stopped what he was doing and allegedly put something inside his pants pocket.

The female officer then approached Wilson and asked him what he was doing. Allegedly, out of anger, Wilson told her that she had no business bothering him or checking on what he was doing and said he was not doing anything illegal.

Out of fear for her safety, the source said — and the fact that Wilson is much bigger than she — the female officer decided not to pat down Wilson for any drugs or paraphernalia in his possession, but called her supervisor and members of the DPS Vice & Narcotics Units for assistance.

The female officer also allegedly reported that during her night shift, Wilson did not sleep the whole night, instead he used the computer the whole night and continued on during the day when a new police officer then came in for the morning shift.

Members of the Vice & Narcotics Units notified the Probation Officer regarding the alleged involvement of Wilson with meth, the source told Samoa News, and a representative from the court went over to the FPS last Thursday and approached Wilson to perform a drug test.

Wilson was then transferred back to the TCF to a wait the date of his sentencing, according to the source.

Wilson, who pled guilty to unlawful possession of methamphetamine and stealing, both felonies has admitted that while working as a police officer at the JDC, he smoked meth with his co-defendant, former police officer Okesene Alo inside the JDC kitchen and also inside the office. Furthermore, he also admitted that he stole food front the facility.

Co-defendant Alo was found guilty during his June jury trial on 7 criminal counts, while the 4 other counts were dismissed. He is to appear in High Court on Sept. 28, 2018 for sentencing.

Another co-defendant Letuli has agreed to plead guilty under a plea agreement with the government, to one count of unlawful possession of a controlled substance, to wit; methamphetamine, in exchange to the government dismissing 7 other counts — of which 2 were misdemeanors and the other 5 are class D felonies.