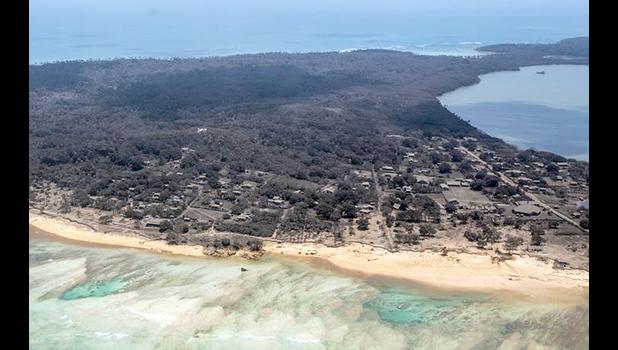 Wellington, NEW ZEALAND — The Tongan government has confirmed that all houses on the island of Mango were wiped out in the tsunami that followed Saturday's volcanic eruption.

It also confirmed that three people are now known to have died: a 65-year-old woman in Mango and a 49-year-old man in Nomuka, both in the outlying Ha'apai island group; as well as British national Angela Glover in Tongatapu.

The Tongan navy had deployed with health teams and water, food and tents to the Ha'apai islands.

One aerial image taken by the New Zealand Defence Force (NZDF) showed Mango and described the damage there as "catastrophic".

No houses, but just a few temporary tarpaulin shelters could be seen.

The Tongan government said Mango, Atata, and Fonoifua islands were all being evacuated, and that water supplies in Tonga were seriously affected.

The government also said there were multiple injuries.

It is the first official statement the kingdom has made about the disaster to international media.

"People panic, people run and get injuries," Tu'ihalangingie told Reuters. "Possibly there will be more deaths and we just pray that is not the case."

With communications in the South Pacific island nation cut, the true extent of casualties is still not clear.

Ms Glover, 50, was the first known death in the tsunami, swept away as she tried to rescue the dogs she cared for at a shelter.

Australia's Minister for the Pacific Zed Seselja said conditions on other outer islands were "very tough, we understand, with many houses being destroyed in the tsunami".

The United Nations had earlier reported a distress signal was detected in Ha'apai, where Mango is located.

The Tongan navy reported the area was hit by waves estimated to be 5m-10m high, said the UN Office for the Co-ordination of Humanitarian Affairs.

Atata and Mango are between 50km and 70km from the Hunga Tonga-Hunga Ha'apai volcano, which sent tsunami waves across the Pacific Ocean and was heard some 2,300km away in New Zealand when it erupted on Saturday.

Atata has a population of about 100 people and Mango about 50 people.

"It is very alarming to see the wave possibly went through Atata from one end to the other," said Tu'ihalangingie.

The NZDF images were posted unofficially on a Facebook site and confirmed by Tu'ihalangingie.

One caption described the runway as "unserviceable" because of the layer of ash on it, meaning aircraft cannot land there.

It said the clearance operation was being done with shovels and wheelbarrows, and that "no heavy excavation machinery was observed".