Teens, veterans, and even the elderly got a piece of the action — 2019 ‘Get Into Your Sanctuary’ a HUGE success 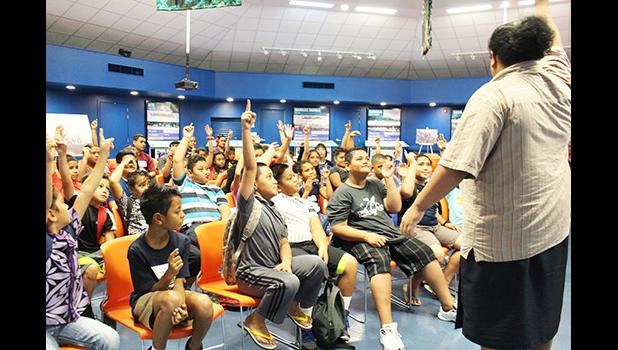 A total of 121 people took part in this year’s event, including a mixture of summer program teens, the Faga’itua Vikings football team, and local residents who just wanted to know more about deep-sea research.

The Fagaitua Vikings football team joined other local youngsters this year at the Tauese P.F. Sunia Ocean Center during one portion of the 2019 Get Into Your Sanctuary event, hosted by the NMSAS. [photo: NMSAS]

Because the 2019 GIYS event coincided with the arrival of the E/V nautilus research team, the NMSAS crew took advantage of the partnership and offered a live telepresence interaction at the Tauese P.F. Sunia Ocean Center, with the Nautilus crew and famed oceanographer Dr. Robert Ballard.

August 2nd and August 5th were extra special, as the 'Vet Into Your Sanctuary' and 'Seniors in the Sanctuary' themes were prioritized in an effort to engage local veterans (Veterans Affairs Office) and the elderly population (American Samoa Territorial Administration on Aging) through outreach, including immersive virtual reality tours, discussions surrounding climate issues, and a photo booth.

“Participants were enthusiastic about their experience, and have expressed interest in continued outreach with NMSAS,” the NMSAS reports. A total of 91 people were served on those particular days.

On August 3rd, NMSAS partnered with Aunu`u — a Sanctuary village — collaborating to host a ‘Sanctuary Summer Fun Day’ during which over 200 visitors sailed to the island and experienced various activities, including guided interpretive hikes, scavenger hunts, and weaving demonstrations - at the same time, supporting Aunu’u local businesses.

NMSAS staff, along with local kids, during a quick trip to Aunu’u as part of the 2019 Get Into Your Sanctuary event hosted by the NMSAS earlier this month. [photo: NMSAS]

The village council and members of the clergy for Aunu’u were present to welcome the visitors and officially open the event. According to the NMSAS, the ‘highlight’ of the day was a visit by two pods of humpback whales. “Residents and visitors alike expressed awe and were very excited to spot tafola in the early season of their migration south. In all, there were over 400 participants in this year's GIYS events,” the NMSAS reports.

The ‘Get Into Your Sanctuary’ weekend is an annual campaign that “allows our sanctuary site to coordinate outreach efforts with our communities - linking place to people - and is effective to promote not only our site’s objectives, but also our system-wide goals. This year’s GIYS events were a success because so many communities got involved.”

Some of the local youngsters who took part in this year’s highly successful Get Into Your Sanctuary event, hosted by the National Marine Sanctuary of American Samoa. [photo: NMSAS]