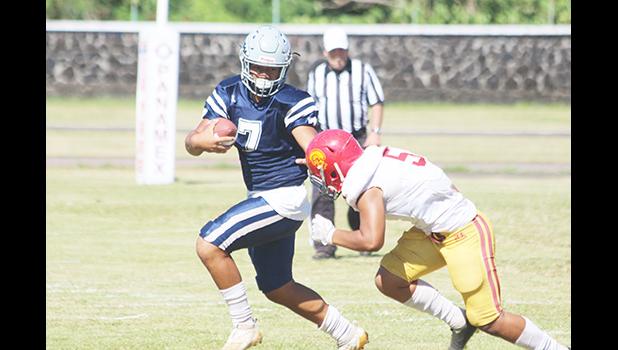 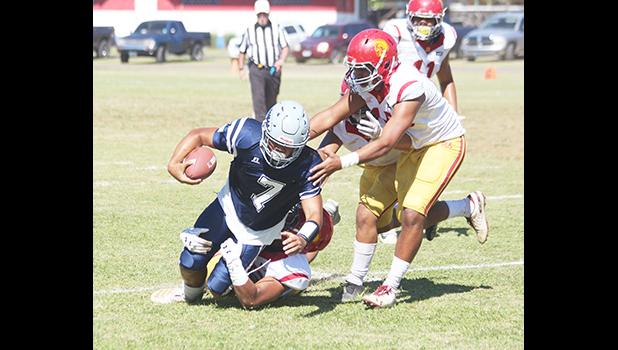 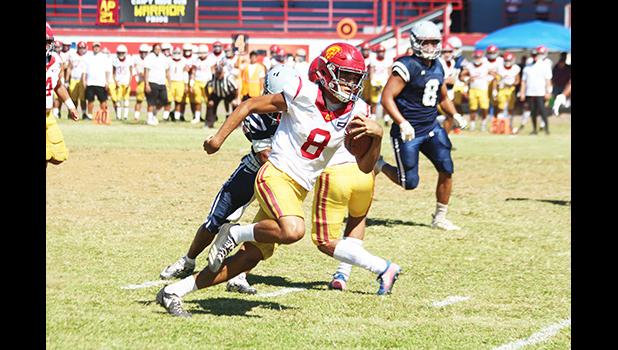 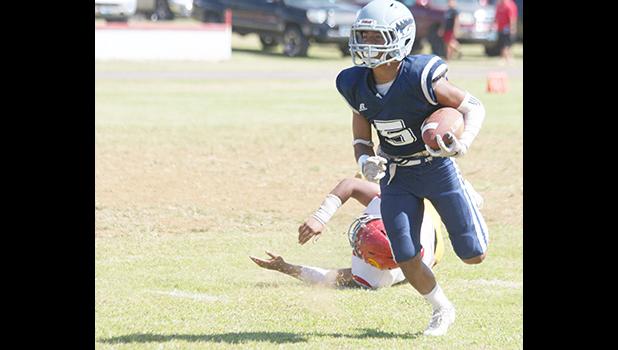 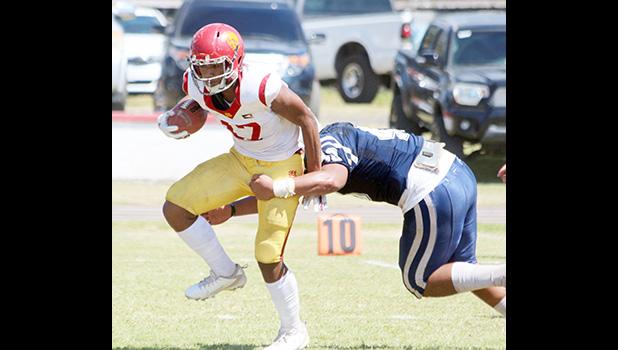 Samoana’s comeback victory was ‘The’ best game of the season … thus far
By
Tony Gasu
tony@samoanews.com

Pago Pago, AMERICAN SAMOA — You heard it right! Head Coach Pati Pati and his mighty Samoana Sharks won the play-off game against the Warriors  – The Blue Empire is going to the Championship showdown, to face the No. 1 seed in the league – Head Coach Sua’ese Pooch Ta’ase and his ‘Big Red Machine’, the Faga’itua Vikings, this Saturday at the Veterans Memorial Stadium.

It was a match up that went down to the very last second of the game, as the Warriors tried their best to hold off the Sharks with their 29 - 26 lead late in the fourth quarter, but Samoana’s Offensive Coordinator pulled out his trick plays and told his boys to ‘Believe’, and Samoana did just that within the final seconds of the game, as they pulled off the best comeback victory ever this year, with just 1 second left on the clock.

The Sharks opened up this match receiving the opening kick-off of the game, and they persuaded the Warriors to man coverage as the Sharks didn’t open things up quite like they’re used to with the passing game – Samoana started off on the ground, trying to see how strong Tafuna’s defensive run coverage would stand against their ground attack, just to test the waters during the first quarter of the match.

Tafuna who is known to be one of the powerhouse ground attackers in the league with their Beast of a running back, Niko Soava didn’t hesitate to go to the ground game to gain yardage, but they were shocked to see Mazaichi Aviu and Daniel McMoore leading out a vicious defensive ground containment for Samoana.

It was a scoreless first quarter for both teams as they showcased some of the best defensive coverage plays of this season.

The Warrior Nation was the first to draw blood midway through the second quarter of play, when it finally decided to change things up to the passing game, catching the Sharks off-guard, when they went on back-to-back passing plays without huddling – A long pass to John Allen set them up at the 30-yard line – From there, their first down and Oakland Salave’a rolled out with the play-action pass to find Isaiah Gurr wide open in the end zone for the first touchdown of the game with just 4:48 remaining in the first half of play.

Tafuna’s field goal conversion was good enough to put them ahead with a 7-point lead.

Samoana’s offense replies 3:43 in the second quarter, and their first down at the 33-yard line from a personal foul penalty against Tafuna, the Sharks quarterback Viliamu Tanielu drops back to fire a long pass to Malaetasi Amisone for Samoana’s first touchdown of the game.

Samoana didn’t settle to tie things up, as they formed up in field goal formation, but preferred to fake it when Kobe Lefiti rolled out with the ball and lobbed a perfect pass to Avory Seumanutafa to the corner of the end zone for an 8 - 7 lead.

Tafuna’s second touchdown begins with Tafuna’s third and goal from the 3-yard line – Samoana expecting the run, but Salave’a pulls out of the option play, and quickly fires a pass to Pa’apa’a Mauigoa on a seam route to score with just 11 seconds remaining in the second quarter.

Their two-point conversion was a reverse wide receiver pass from Mauigoa to Jared Asalele to secure the lead 15- 8.

Head Coach Kevin Magalei and his Tafuna Warriors opened up the second half, with some huge carries by Soava and Salave’a to move the ball downfield after receiving the opening kick-off – 7:52 into the third quarter of play, and at Tafuna’s third down from the 3-yard line — Salave’a threw off Samoana’s defense with a fake hand off to Koison Ozu, and instead fired a quick slant pass to Gurr for another Warriors touchdown.

Samoana pounces back as they immediately went to their famous ‘Air Attack’ when they had their first offensive possession of the second half – it begins with a long pass to Amisone, the Sharks setup at the 20-yard line. From there, Tanielu looked far for an open receiver to open up Tafuna’s defensive coverage, and decided to run for it right up the middle for a first and goal at the 10-yard line. Tanielu again fakes out Tafuna’s defense with a fake inside hand off to Samson Leulu Tupuola, and looked up to fire a quick out-route pass to Seumanutafa for their second touchdown of the game, as they came back and trailed the Warriors 22 - 14 with just 4:19 remaining in the third quarter.

Opening up the final quarter of play with a successful defensive coverage was the Sharks whose defense was lit up and on fire to halt Tafuna’s running game – After successfully stopping Tafuna’s fake punt on fourth down deep inside Warrior territory, the Sharks were setup for a first down at the 25 yard line – From there, Tanielu looked far to fire a pass to Seumanutafa who spotted Samoana a first and goal at the 1 yard line.

Samoana quickly ran to the line and snapped the ball as Tanielu muscled his way through Tafuna’s defensive line to score Samoana’s third touchdown of the game. Their two point attempt was a quarterback keeper by Tanielu that was immediately halted by Herman Sufia in the backfield for a loss, as the Sharks came back to trail the Warriors 22 - 20.

The Warriors beast of a running back Soava, who came out of an injury, and carried the Warriors upfield with a big run – Tafuna’s first down from the 38-yard line and Soava again slipped through midfield, breaking tackles on his way to the end zone to score another Tafuna touchdown. The field goal conversion extended their lead to 29 - 20 with just 6:29 remaining in the ball game.

Samoana doesn’t hesitate to go back to the passing game to move the chains downfield, as they were aiming to close in on points – 5:32 remaining in the game, and Samoana playing a desperate fourth and goal from the 4-yard line, a reverse hand off to Lefiti who ran to the backfield to lure defenders towards him – Meanwhile, Tanielu was already running a post route to the end zone – Lefiti fired a pass to Tanielu and connected for another Samoana touchdown, as they inched closer to trail the Warriors 29 - 26.

Tafuna continuously ran the ball to run the clock out and gain yardage – It came down to a fourth down that Samoana needed to stop in order for their offense to field – 1:22 seconds remaining on the board, and Samoana’s defense couldn’t stop Tafuna from converting a first down.

Just when Tafuna thought it was game over, they decided to run the ball again on first and ten from their own 39 yard line – Suddenly, a miracle came through for Samoana, when a vicious defensive stop from Mazaichi Aviu caused a fumble that was recovered by Samoana inside Tafuna territory, and Samoana finally had an opportunity to score.

Samoana’s first down from the 42-yard line, and Tanielu who couldn’t find an open receiver downfield, decided to tuck and run with it, as he weaved his way through defenders to spot Samoana a threatening first and goal for the Sharks.

With just 1 second remaining on the clock, Samoana had a big decision to make coming out of a time-out – they brought out their special teams to try and kick a field goal to go into overtime, totally faked out the Warriors when they faked the field goal and Lefiti rolled out with the ball firing a pass to Tuala Fa’atonu to score the winning touchdown of the game with no time remaining on the clock.

A perfect play for the perfect time, for the perfect game, and Samoana closed if off with a 32 - 29 victory as they prepare to head to the Championship game this Saturday.