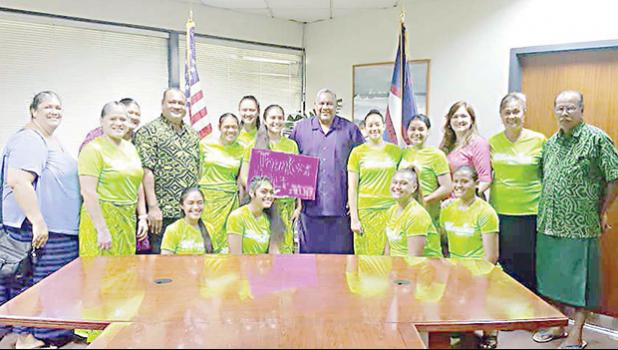 They will also compete in the JPS Hawaii Volleyball Tournament – 2 tournaments in 1 trip
By
Tony Gasu
tony@samoanews.com

Pago Pago, AMERICAN SAMOA — The JPS Measina Volleyball Club which consists of female volleyball players from various high schools in the territory will represent American Samoa in the USAV Aloha Summer Classic, set to be held at the Hawaii Convention Center, June 14 - 16.

The 10-player team will depart the island this week and will be led by head coach Lydia Faleafine Nomura.

The team has been fundraising since October of last year and they train when they can.

According to Faleafine-Nomura, they’ve been consistent in the past two months with their practice and preparations.

She said there were originally 12 players scheduled to go, but one Faga’itua player opted to play soccer and the other player, from Leone, cannot go because she's heading to Orlando, Florida with DOE for the HOSA event.

When asked about the selection of the girls on her team, the head coach said, “Players were selected based on their season performance. Two from Fagaitua, two from Leone, one from Manu'a, and seven from Tafuna. While they are representatives of high school squads, they are playing under the JPS Measina Club.”

The team is made up of 3 freshmen, 3 sophomores, and 4 juniors. They are captained by Abish Schroeder Autele. Also on the team are:

According to Faleafine-Nomura, the girls have worked very hard in fundraising for their trip. “The girls operated concessions at the high school football games and also the JPS games. We also raised funds through selling spaghetti plates, rummage and bake sales. We also participated in lucky number draws. We were fortunate to be eligible under the ASG student miles program and received financial assistance from ASG to help with our hotel.” Other local private businesses pitched in as well.

Samoa News asked Faleafine-Nomura about their goal and focus, going into these two off-island volleyball competition. “Measina’s primary focus is to expose players to competition and hopefully gain interest from coaches off-island. All of the 10 players have the potential to play in college. All of the players with the exception of one have a GPA of 3.5 and above. In fact, most of the girls in Measina are academically inclined.”

She continued “While the primary focus is our academics, the hope is to obtain an athletic scholarship as well."

The Measina Volleyball Club will be performing a Samoan siva at the Aloha Tournament and the Aloha games will be streamed live.