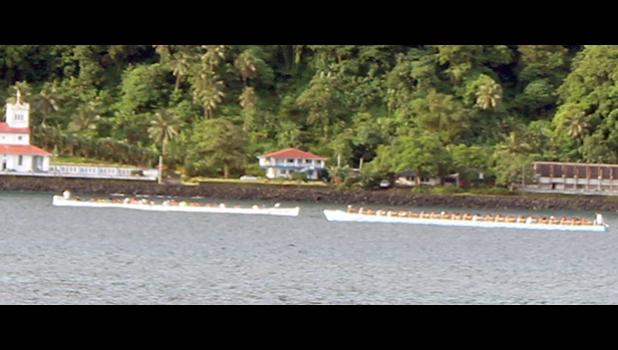 Who will win?
By
Samoa News staff
reporters@samoanews.com

The 2019 Flag Day fautasi race will go on as planned this Saturday morning, Apr. 13th.

The 5-mile race will start outside the harbor entrance and nothing has changed, as of press time, although there is a cruise ship scheduled to dock at the Fagatogo wharf that same morning.

The American Samoa Visitors Bureau (ASVB) anticipates the vessel to arrive during the early morning hours, and the fautasi race will start after the cruise ship is anchored safely. All longboats are to be at the starting line by 7:30 a.m. and the race is tentatively scheduled for 8 a.m.

Last week, fautasi captains drew their lanes at the Office of Samoan Affairs.

According to Deputy Secretary of Samoan Affairs Malemo Tausaga, there will be no preliminary heats. That means one race, all eleven boats. It has been made clear that if weather conditions are not favorable that day, the fautasi race will be postponed until the following Monday, Apr. 15th.

The following is the list of fautasi that will be competing, in order of the lane numbers that were drawn last week: