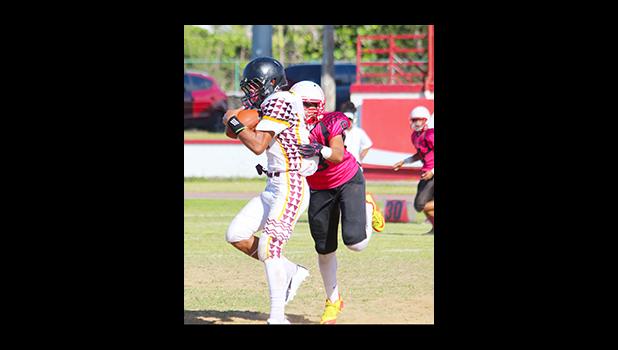 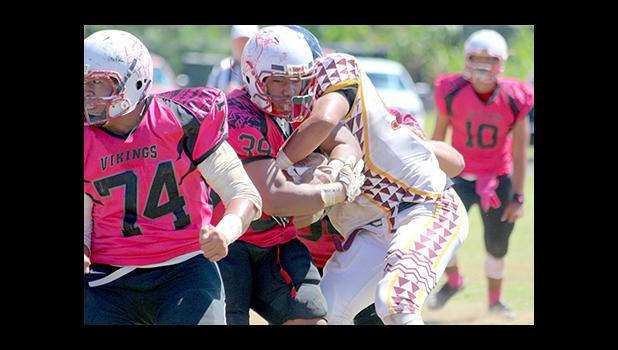 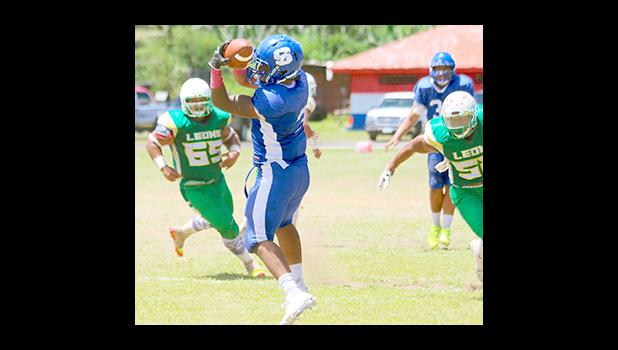 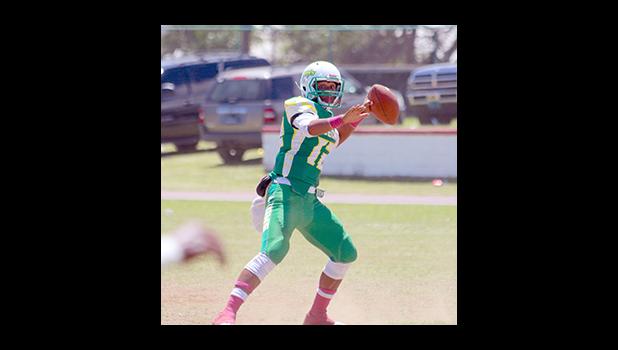 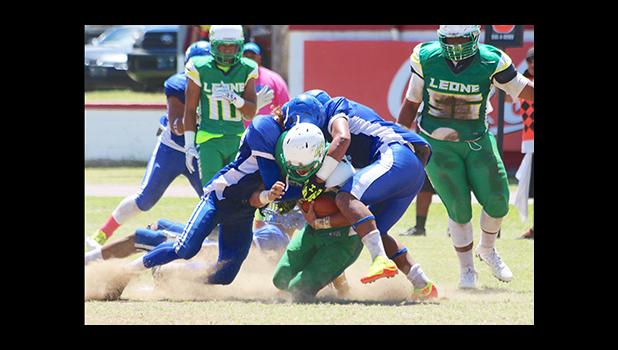 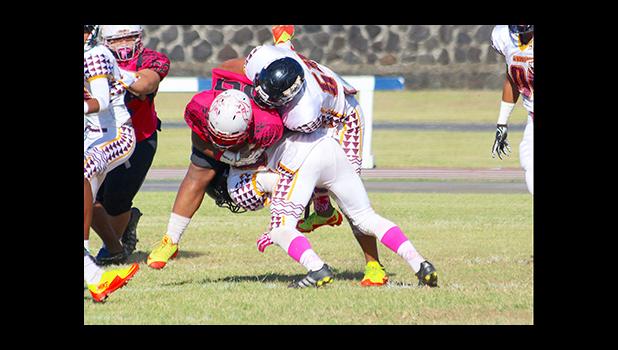 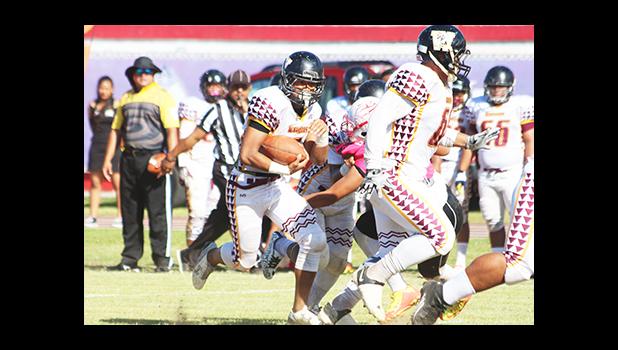 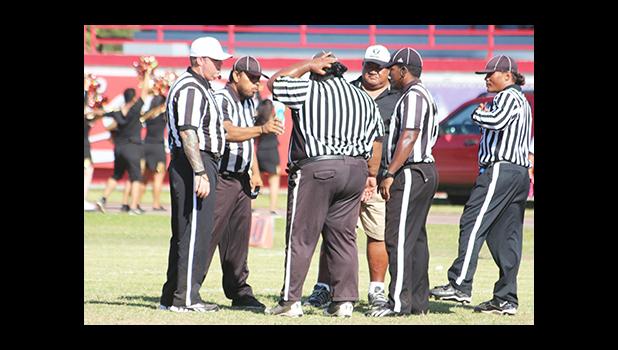 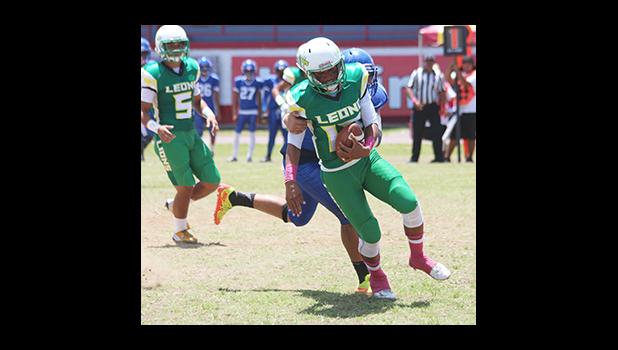 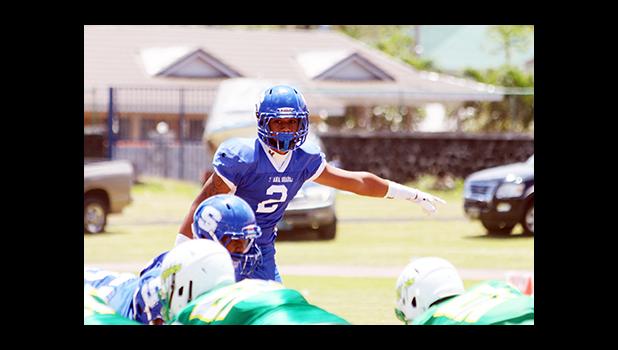 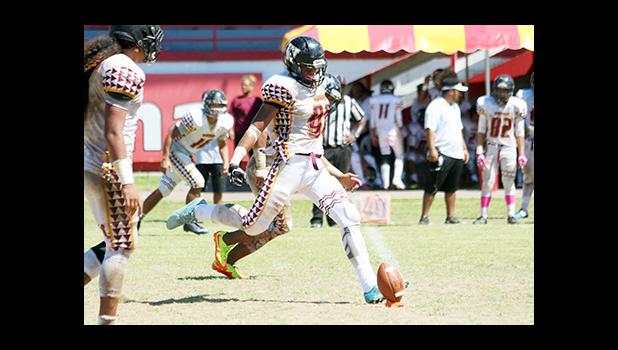 This past weekend marked the 8th week of the American Samoa High School Athletic Associations (ASHSAA) Varsity football action at the Veterans Memorial Stadium, where Sharks Junior cornerback and field goal kicker, Elliot Lelei, carried the Sharks to victory with a pair of field goals – but the real story was about their defense.

The Warriors who had a hard time trying to get through Head Coach Ta’ase and his Vikings in their ‘Battle of the Toa’s’ rival game – however managed to escape and punished the Vikings in a 26 - 16 victory last Saturday morning, in the opening game of the scheduled triple header.

BATTLE OF THE TOA

The Warriors Tala Sufia showed the Vikings that the Warriors do have a lethal passing game, when he opened on all cylinders in their air raid that kept catching the Vikings off-guard every time they kept running a draw. It wasn’t until the second quarter of the game, when Sufia hooked up with Niles Tuamoheloa for the opening touchdown of the game on a long passing play.

Midway through the first quarter, and Andrew Toilolo broke through the middle with a draw play that went all the way to the end zone for a 66-yard touchdown run – but was called back on a holding penalty at midfield. They went into halftime with the Warriors leading by six.

In the third, Raemos Fano led the Vikings back to life with an unstoppable no-huddle option attack – a strategy that carried them inside Tafuna’s red zone. The Warriors lured by Faga’itua’s running game, were blinded by a quick tight end release pass play to #48 for a 2-yard touchdown passing play that brought the Vikes back to life.

Their two-point conversion, a fake running play again and a pass out to #48 again secured them the lead by two points, as they came back to take the lead 6 - 8.

Only 32 seconds remaining in the third, and the Warriors Andrew Sufia broke loose inside Vikings territory to record another Warriors touchdown, a 3-yard touchdown run by Toilolo brought Tafuna back to take the lead 14 - 8 after a good quarterback keep by Sufia for two points.

Sufia led a vicious drive towards the goal posts as they were inching to break away with another end zone appearance to seal the deal in this one – midway through the final quarter of play and the Warriors pounced into the end zone again, Sufia on a quarterback keeper led the Warriors to six more points, as they are now officially in Rank No.1 of their division, after sending the Vikes sailing back to the East with a 12-point loss on the books, a Warriors win of  20- 8.

CLASH OF THE TITANS

It was the Junior cornerback from Faga’alu, Elliot Lelei that kicked a pair of field goals that took Samoana to their first victory against the Leone Lions in this regular season.

Samoana dominated by the Lions defense, opted for a field goal in the first quarter of their match, from Leone’s 25-yard line. A kick by Lelei that gave Samoana a comfortable three-point lead into the second quarter of play.

At the same time, Leone’s offensive unit kept getting punished by Samoana’s defense, as they were working hard to create opportunities for each other. Helping out big time on the Sharks defense was David Mikaele who kept thrashing Leone’s offensive line, creating opportunities for Samoana’s defense line to make stops in the back field, which they had a share of tackles for losses each.

Lelei with an interception and a fumble recovery helped out Samoana big time, and with the threatening appearance of Cornelius Aiava and returning middle linebacker Vimoto Mageo, the Sharks defense was solid as can be — midway through the first half of play and Samoana’s head coach Pati Pati opted for another field goal by Lelei on 4th down, a field goal that put Samoana in the lead by six, all the way to full time of the game.