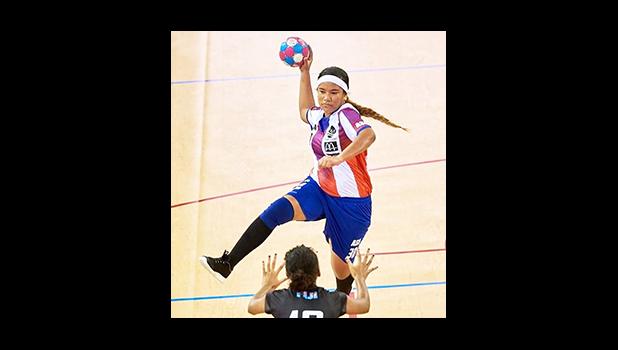 “Our girls lost a very close match to New Zealand, 21-24,” said Carl Floor Sr., the team’s head coach in an email responding to Samoa News inquiries after the match on Wednesday (Tuesday in American Samoa).

Floor, who is also president of the American Samoa Handball Association (ASHA), said New Zealand came out very strong in the first half, coercing American Samoa to call an early timeout to make an adjustment.

“My girls looked a little bit intimidated in the early part of the game. I took an early time out to calm them down,” he explained. “Three of my starting players are actually under 17 and it was easy to understand why they were intimidated by the more physical and muscular players of the New Zealand team."

However, he said, the team was able to gather their composure and play well enough to secure a 12-10 halftime lead. Following the break, the teams traded points throughout the next 20 minutes before American Samoa made a few costly penalties.

He said Pai Fanene, Lynette Liu, and Stephanie Floor all had to serve two-minute penalties which left the team short on both offense and defense.

“This, combined with a few bad passes and a few drops allowed New Zealand to tie the game and eventually secure 24 -21 win,” he said, adding that American Samoa was to play host country, New Caledonia last night (Thursday in New Caledonia) “in what will be a very tough match.”

"I'm very proud of how the girls played and we are all a bit disappointed with the results; however, when you consider that most of my team is really under-17 it makes the loss a little easier to deal with,” Floor said. “This is the first indoor tournament for most of the girls on the team and they are representing American Samoa at the highest level on and off the court — everyone should be proud.”

American Samoa won its first two matches against Papua New Guinea and Fiji — also a strong contender. “Fiji opened the game strong, leading by a score of 3-1 within the first 4 minutes before American Samoa’s offense kicked in,” he explained.

“Fiji made the game interesting in the second half after making a few adjustments and brought the game to within 9 points” before American Samoa fought back.

During this match, “The girls did very well in limiting their mistakes and providing opportunities for bench players to once again get more experience. I think our defense did a great job and we were able to get our younger goalkeepers Aiga Isa'aka, 14, and Dianne Loe, 16, a full game experience,” Floor said. “They both came through big and made some very, very tough saves."

He added, “Danielle Floor and Lynette Liu also made some incredible assists the helped bring the crowd to their feet.”

For the first two games, the scoring leaders for American Samoa were Lynette Liu with 12, Pai Fanene with 11, Jasmine Liu with 10, and Stephanie Floor with 8.