Illicit gun trade and WMDS under spotlight in Apia 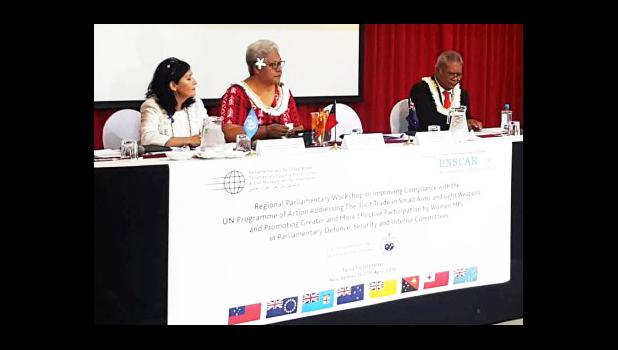 Apia, SAMOA — The continuing problem of Illicit Trade in Small Arms in the Pacific region was brought under the microscope in Apia last week.

It happened during a regional Parliamentary Workshop on Mobilizing Parliamentarians to Advocate for Improved Compliance with the UN Programme of Action on the Illicit Trade in Small Arms and Light Weapons.

Organised by Parliamentarians for Global Action (P.G.A.) in consultation with the Legislative Assembly of Samoa, the workshop convened Legislators from across the region to review and discuss steps taken, or that may be taken in the near future, to Address the Illicit Trade in Small Arms and Light Weapons in the region.

There were presentations from the United Nations Resident Coordinator and U.N.D.P. Resident Representative in Samoa, Simona Marinescu; and High Commissioner of New Zealand to Samoa, David Nicholson.

The negative impact of this illicit trade manifests itself, not only in terms of loss of life and serious injuries, but also in terms of a negative impact on achievement of the UN Sustainable Development Goals, and has been widely documented in recent years, in particular the disproportionately adverse impact on Women in many domestic violence cases occasioned by this illicit trade in Small Arms and Light Weapons.