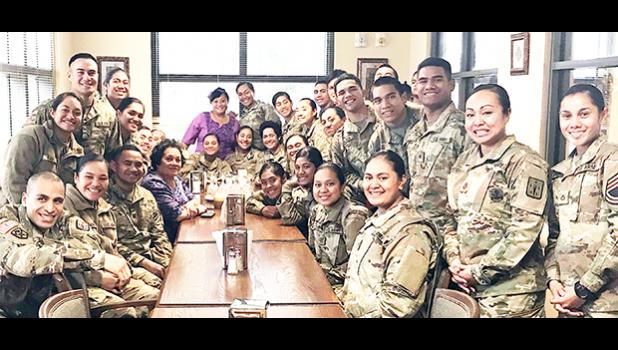 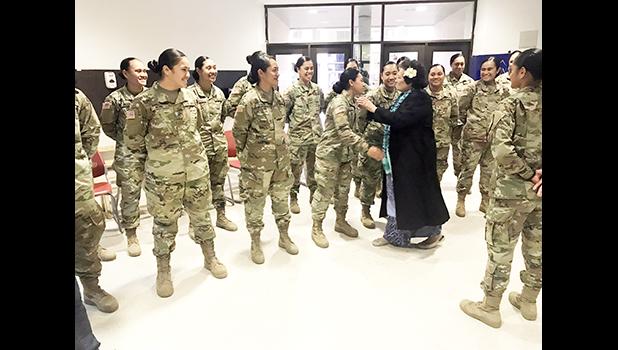 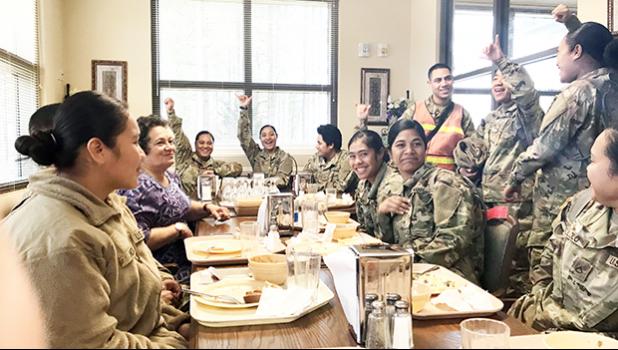 Washington, D.C. — Congresswoman Aumua Amata was pleased to greet soldiers from American Samoa and spend time with them at Fort Lee, Virginia, along with touring Fort Lee and the U.S. Army Women’s Museum, observing training in action and being briefed on Fort Lee’s operations.

The soldiers are stationed at Fort Lee for their Advanced Individual Training (AIT) and will not be able to return home for the holidays.

“It was a great pleasure to greet our soldiers from American Samoa on behalf of everyone back home, and wish them merry Christmas,” said Aumua Amata. “They sent warm Christmas wishes back to everyone. I was able to take a few moments to tell them we’re all very proud of them, and thinking of them in their training, and at this time of year.”

In YouTube clips with Amata, the troops wish people in American Samoa a Merry Christmas and sends greetings.

American Samoa has the highest enlistment rate in the U.S. Army of any state or territory, and these soldiers are just getting started in their journey that continues that proud tradition of uniformed service.

Congresswoman Amata told the troops, “Let me just take a minute to tell you this: You are doing important work here. It’s worth it – the training, the early mornings, and all the effort.

“For the rest of your lives, you will say with pride that you served. You’re soldiers.

I’ve seen what that means for many years. I saw it in my father, and in many others. Strength. Confidence. Leadership. Integrity. You’re serving your country, but you’re also learning to live great lives,” she said.

Fort Lee is an Army garrison and training installation, home to 27,000 at a time, that welcomes 70,000 through its classrooms yearly. The Fort consists of the Combined Arms Support Command, along with the Army Logistics University, the U.S. Army Ordnance School, the U.S. Army Quartermaster School and the U.S. Army Transportation School. Fort Lee, established in 1917 as Camp Lee because of World War I, celebrated its Centennial this year.

Amata visited the display at the Army Women’s Museum, which honors the heroic memory of Sgt. Tina Time, who was the first woman from American Samoa to die in the Iraq war. She was killed on Dec. 13, 2004.

The U.S. Army Women’s Museum preserves and shares the history of contributions of women since the American Revolutionary War. Established in 1955, the museum is an educational institution for all ages, with artifacts and archives.