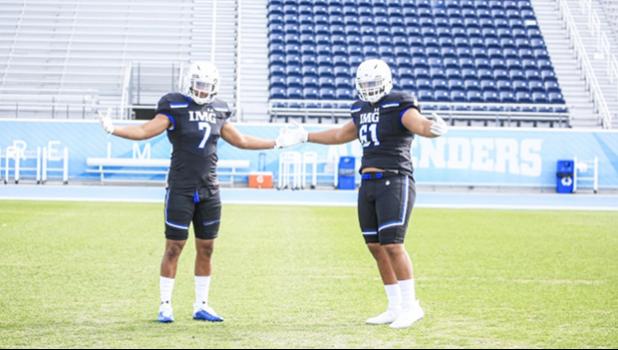 IMG Academy is a boarding school sitting on 450 acres of property in Bradenton, Florida. According to Wikipedia.org, IMG Academy is a preparatory boarding school and sports training destination. It is a division of IMG, a global sports and media business company that was originally known as the “International Management Group”.

Recently, the Mauigoa brothers, Francisco and Francis, were presented with an opportunity to attend IMG Academy. After a lot of prayer and family discussion, the Mauigoa family ultimately decided to take advantage of the chance.

The brothers are some of the top football prospects coming out of American Samoa. The Mauigoa brothers played at Tafuna High School and helped the Warriors win the ASHAA High School Football Championship for the 2019- 2020 school year.

Francisco and Francis were able to depart American Samoa last month and enroll into IMG Academy this Spring semester.

He signed with Washington State University in December.

“My advice to the youth of American Samoa: keep working and do not stop believing in yourself. When the chance is given to you, go at it with all your strength and prove yourself.”

At 15 years old, Francis is 6’6” and weighs 315 lbs. He has been recognized as one of the top football athletes in the country. As a freshman in high school, he was selected as a MaxPrep Freshman All American. He is a 4-star prospect and rated the #1 DL in the country for his recruiting class. He is also ranked 4th in the country for playing both OL and DL.

“I decided to attend IMG because it is a huge opportunity for me to compete with the top players in the country,” Francis said. “IMG will prepare me for college and football. I look forward to getting bigger, faster, to learn more about the game and be unblockable.

“My goal is to make my family proud and retire my mom and dad.

“My advice to the youth of American Samoa, if you have the opportunity to get better, take it,” says Francis.