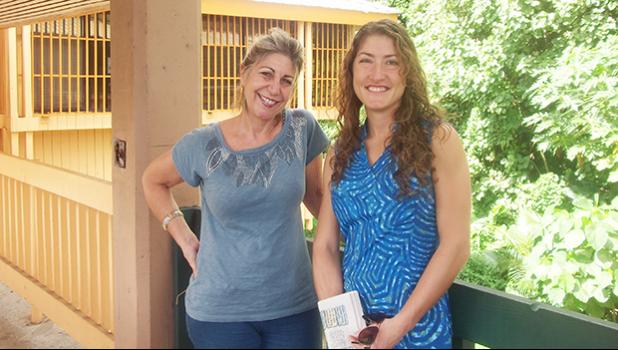 Pago Pago, AMERICAN SAMOA — We knew her as Tina Hammock, who in 2013 was the NOAA station chief for their Climate and Atmosphere Observatory on the eastern end of Tutuila at Cape Matatula. She left American Samoa that year after being chosen from a pool of over 6,000 applicants to become a NASA astronaut.

This past Thursday she blasted off for the international space station and will take part in the first all-women spacewalk later this month.

Christina Koch — as she is now known since she married after leaving the territory — began her NASA career at Goddard Space Flight Center’s Laboratory in Maryland where she worked on several scientific instruments flying aboard missions exploring the solar system. She went on to Johns Hopkins University’s Applied Physics Laboratory where she continued designing instruments. Her contributions included the Energetic Particle Detector Instrument aboard the Juno spacecraft currently studying Jupiter and the X‐ray Spectrometer Instrument aboard the Suzaku Mission studying the Van Allen radiation belts.

Since selection for the astronaut program in June 2013, Koch has undergone extensive training in International Space Station systems, spacewalks, robotics, physiological training and water and wilderness survival training. She also learned to fly the T-38 aircraft.

Tina grew up in an era when the dream of space exploration became a reality. Beginning with Skylab and the Lunar Roving Vehicles, and on to America's Apollo space program — which demonstrated that men could indeed travel into space and return safely to earth — the scientific advances were in place when she was born which made one of mankind's most ancient dreams possible.

“My parents are so excited, so proud, so supportive, they know how much I believe in this. My two brothers and two sisters are all so thrilled,” she told Samoa News in a 2013 interview. As the eldest of five, she set the bar high.

Koch says she wanted to be an astronaut for as long as she could remember ”from the very first time I heard about it,” she said.

“My interest began with my dad, who was keenly interested in space. We had scientific magazines about the space program always present in our home … I just always thought it was “really cool”… any kind of exploration… things on the frontier… I knew that's where I wanted to be. And of course, space is the ultimate frontier.”

She was only supposed to be in American Samoa for three months, but she extended her stay two different times because she enjoyed it so much here… “I love the people, the welcoming nature of the island… I love hiking here, scuba diving, snorkeling… I love my job, being able to work in such a beautiful place. It’s an ideal world here.”

During her time in the territory, she also found time to give tours of the NOAA station to students and visitors, saying that working with the community gives her great pleasure.

And she left many friends behind including her “Tula mom” Tala Silao, who said back then when she heard the news, “I was so happy for her, I cried. I’m gonna miss her, but I’m so excited for her.”  Co-worker Vai Talamoa of Malaeloa called her “an amazing lady, very talented, self motivated… just awesome to work with. If NASA chose her, it’s because of the outstanding person she is — so capable, just dynamite. It’s been an honor to work with her. I’m proud to say I know an astronaut — how many people can say that?”

Along with American astronaut Anne McClain, Koch will walk in space on March 29.

"We feel lucky that it [the all-female spacewalk] just sort of happened to be in Women's History Month," NASA's Stephanie Schierholz said.

Back in 2013 when she was asked if she would take something special into space with her, Tina replied, “Maybe I'll take some Samoan banana chips and oka with me, if they let it on board,” she laughed. “I'll do an umu in space... ha ha… maybe not… but I'll miss my umu!”