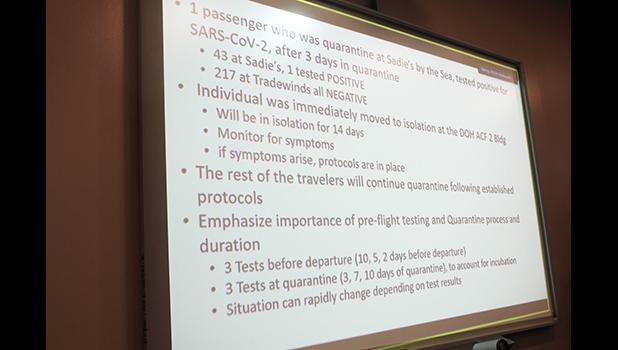 Pago Pago, AMERICAN SAMOA — The local resident, who was a passenger on the Sept. 13th flight from Honolulu and tested positive of COVID-19, is in isolation for two weeks, while all ASG employees who worked that flight are in quarantine, as the government monitors the situation, with commercial flights to continue between Honolulu and Pago Pago.

This is according to COVID-19 Task Force chairman, Lt. Gov. Talauega Eleasalo V. Ale and health officials during a news conference last Friday morning announcing the territory’s first COVID-19 positive case brought in by a local resident, while American Samoa remains under Code-Blue health threat-level with “business as usual”, without any new local COVID-19 restrictions.

All 260 passengers who arrived on the Sept. 13th flight — when commercial air service resumed by Hawaiian Airlines between Honolulu and Pago Pago since March last year — were tested Thursday.

And by Thursday night, the positive result came back and the local resident, “was immediately moved to isolation” at the ASG’s Alternate Care Facility 2 Building in Tafuna, where the person will be in isolation for 14-days; monitored for symptoms; and if symptoms arise, protocols are in place, according to Health Department information shared at the news conference.

DOH also says that the traveler was asymptomatic when tested and will continue to be monitored. Furthermore, this individual is fully vaccinated and preliminary findings by DoH indicate this is not a historical positive case.

The rest of the travelers from the Sept. 13th flight would continue quarantine following established protocols, said DoH.

At the news conference, Talauega said the local resident was fully vaccinated before traveling to Hawaii and the US mainland. He noted that the traveler had registered with ASG’s TalofaPass web-system and all three required COVID-19 tests conducted prior to boarding the flight to the territory, all came back negative.

Both Talauega and health officials acknowledged during the news conference that protocols and requirements put in place for the resumption of commercial flights played a role in identifying the positive case as well as monitoring of travelers to minimize the risk of a community transmission.

Besides the required three tests prior to traveling to the territory, all arriving passengers must undergo a 10-day quarantine. American Samoa also mandates that all travelers 16 years and older must be fully vaccinated and this requirement is exempted for persons with a medical condition.

Among the passengers from the Sept. 13th flight in quarantine is Gov. Lemanu Peleti Palepoi Sialega Mauga, who held a virtual briefing with Talauega and other task force members before the news conference.

At the news conference, Talauega said the task force already had plans in place prepared in the case of such an incident not only during repatriation flights but also the resumption of commercial flights.

With protocols in place, Talauega said the medical team is not concerned that the imported (border) case will spread out to the community. He said the passenger, now in quarantine, shows no symptoms of the virus and the person is strong and healthy. Additionally, the traveler — during quarantine — was the only occupant in the room and this is the same protocol in place during isolation.

Talauega along with the governor and health officials urges the public to remain calm, practice mask wearing, hand-washing, and social distancing.

Medical team physician, Dr. Peka Lauvao re-confirmed that the traveler was fully vaccinated before traveling to the U.S and both she and Talauega pointed out that even those fully vaccinated can still test positive later, and this is is a known fact.

In a health advisory issued last Friday afternoon, DoH announced that the territory’s COVID-19 vaccine coverage is now at more than 60% of the population while the target remains at 80% or higher.

DoH epidemiologist Dr Aifili Tufa said during the news conference that a contact-tracing process is being carried out, “to pinpoint where in the U.S mainland the passenger was located before traveling to Hawaii before heading to American Samoa.”

He further explained that the “incubation period — [that means the time from when the person is exposed until testing positive] — takes some time for the virus to replicate in your body to show up on our tests. So that time, it can take anywhere from about three to 14 days for that incubation period to happen.

“It’s pretty hard for us to pinpoint exactly where the exposure happen. But we know for sure, that the process that we put in place is working,” he said, adding that contact-tracing will also look at who came in contact with the traveler, upon arrival, as well as ASG workers and those at the quarantine facility.

Both he and Talauega stressed that all those who worked that Sept. 13th flight are currently in quarantine and they will be tested. “We are continuing the contact tracing. We feel very confident that the measure that we put in place has contained this positive [case] where we needed to be, so that we continue a normal life out in the public,” said Talauega.

The task force chairman also said that no new restrictions are expected to be imposed locally due to the imported positive case, which is not going to change anything, as “it’s business as usual” in the territory.

“We planned for this likelihood to happen. We expected that there would be positives. Just like in the repatriation [flights],” he said. “We have a positive case, we have put [the traveler] in isolation and now we feel very comfortable that there’s not going to be any change in our lives. We continue to monitor the situation.”

Regarding the already planned commercial flights from Honolulu through the end of the year, Talauega said there are no changes and these flights will continue as scheduled.

As for local residents thinking of traveling off island now, Talauega advised that, “travel is not encouraged [as] we are in the midst of a pandemic. People who want to go on vacation — I strongly discourage that and we’ve always strongly discouraged that. If you’re just planning to go vacation… don’t do it.”

“One of the few safe places in the world right now is American Samoa and Samoa.  And we want to maintain that,” he said, noting that the task force and ASG has “been very upfront with our people, so that they understand, we’re not trying to hide anything.”

“There is a positive case but we’ve taken care of the passenger and we will be making sure that we resolve this and continue to live normal lives,” he said, but for “people who want to travel for fun, I strongly discourage it. If you don’t have to do it, please don’t do it.”

At the time of the news conference, a federal government advisory panel to the U.S Food and Drug Administration (FDA) was meeting in the U.S to make a recommendation on a third-vaccine shot — or booster shot.

American Samoa residents getting a booster shot, was a one of the questions raised during the news conference and DoH senior pharmacist Dr. Francine Amoa acknowledged many reports from the U.S of the possible importance of the third shot of the vaccine.

She noted the meeting of FDA experts last Friday to review data that has come through, specific for the Pfizer vaccine. “At this point, there was a forecasted date of Sept. 20th to approve a booster dose for everyone. But right now we don’t have confirmation on that, so we’re just going to hold off until we get further confirmation,” she said.

According to The Associated Press, the FDA panel overwhelmingly rejected a plan Friday to give Pfizer COVID-19 booster shots across the board, and instead endorsed the extra vaccine dose only for those who are 65 or older or run a high risk of severe disease.

However, the non-binding recommendation — from an influential committee of outside experts who advise the FDA — is not the last word, the AP reports.

The FDA will consider the group’s advice and make its own decision, probably within days. And the U.S Centers for Disease Control and Prevention is set to weigh in next week.