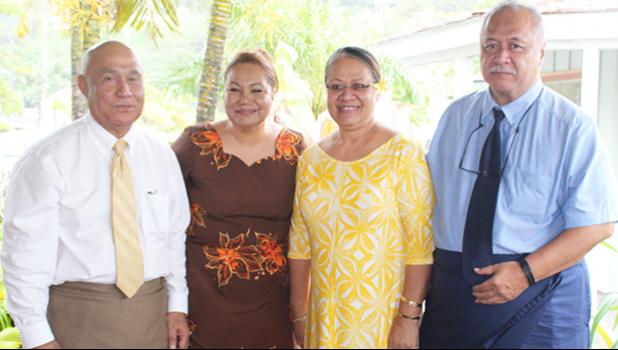 Pago Pago, AMERICAN SAMOA — Candidate for governor, I’aulualo Fa’afetai Talia has “officially” declared that he and candidate for lieutenant governor, Tapa’au Dr. Dan Mageo Aga, will be running in the 2020 gubernatorial race.

The public announcement was made last Saturday morning during the I’aulualo and Tapa’au campaign news media event at Sadie’s by the Sea, amid heavy rains and strong winds, and attended by some 100 family members, friends and supporters — who were invited to witness the “official” announcement.

The gubernatorial team of I’aulualo, who is currently the executive director of the ASG Employees’ Retirement Fund, and Tapa’au — current director of the ASG Office of Political Status, Constitutional Review & Federal Relations — is the second one to publicly announce their plans for the November 2020 elections.

The first team made their announcement earlier this year: Sen. Nuanuaolefeagaiga S. Nua for governor, and Tapumanaia Galu Satele Jr., for lieutenant governor.

“We offer you our lives to serve American Samoa and our people,” I’aulualo told the audience at the start of his speech, adding that whatever God’s gift — through education and work background — given to the him and Tapa’au, they will use it to serve the people of American Samoa.

“Tapa’au and I’aulualo cannot do it alone,” he continued, noting that “Together We Can” — which is also their campaign theme.

“As citizens... of American Samoa, we place the well-being of its people as our highest priority. We are the team of the people,” according to part of the team’s statement, published in a 44-page campaign book distributed at the event, outlining their platform and their personal profiles.

In his speech, delivered in Samoan, I’aulualo said there is no question about the needs of the people of American Samoa at this point in time. He said the current government is trying to address the needs of our people, like in the areas of healthcare and education.

“These are not new issues of needs, as they are common ones,” he said. “And the truth is, whoever is the governor … such needs will not be accomplished in 4-years or 8-years in serving the people.”

The former faipule said the term of the current administration, which he didn’t identify by name, is coming to an end and he and Tapa’au “are offering ourselves, to continue the good work, and to develop new ones to serve our people.”

I’aulualo said that what’s of utmost importance to him and Tapa’au is “economic development”, and there’s a need for a solid plan of economic development moving forward, if there is hope of improving education, healthcare, and other services to the public.

And improved economic development, he said, is through the “digital industry”, now that American Samoa has built its broadband infrastructure with the Hawaiki fiber optic cable.

I’aulualo said that over the years, American Samoa has been dependent on the government and the cannery for employment, but the “digital industry” can provide more employment opportunities and boost the local economy.

He spoke about the federal government’s relationship with American Samoa, saying the territory needs leaders who can properly communicate with the feds. He believes that he and Tapa’au have the knowledge and ability to maintain that proper line of communication with the feds.

And while American Samoa comes under US jurisdiction, the territory and her people “still have our rights” to land, ocean, and air, as specified in the US and American Samoa Constitutions, he said, and reminded the audience that American Samoa still receives federal money.

“We must maintain a lasting and respectful relationship with the federal government and we oppose any attempts to diminish our sovereignty as called for under our treaty, cultural, natural resources, or the general welfare of our people,” the gubernatorial team said in its platform booklet.

“We need to look forward on economic development and we have right now an asset, a digital asset — 200 megabytes [through Hawaiki cable] and the next step is finding ways to create jobs,” he said, and acknowledged those who were involved in bringing Hawaiki here: ASG, Retirement Fund, and the Fono.

Tapa’au addressed the question of why he is running for public office.

For the gubernatorial team’s platform, Tapa’au said it is to be released in phases.

In the first phase of the “I’aulualo and Tapa’au 2020” campaign platform, the team offers a comprehensive vision for the future of American Samoa. In the second phase, the team will propose solutions on how to address the issues facing the people of the territory.

“The broad framework of the first phase is an attempt to include and serve broad segments of the island’s population in the development of public policy,” according to the gubernatorial team.

Phase one of the platform is organized into five pillars: local government and territory; social and quality of life; economy; federal government; and regional and international matters.

Each of the pillars has “priority areas” and under each priority area is a statement that serves as a “guide or a basis” for the development of public policy — which according to the team, “it is what government chooses to do about a particular issue or problem.”

In the second phase, the team will create opportunities for public participation and input.

Both Tapa’au and I’aulualo referred to the booklet handout as the guide of their campaign. Tapa’au told the audience that in the future, more specific details will be provided on other issues.

As of last Saturday morning, the I’aulualo & Tapa’au team had already placed several campaign billboards at various locations on Tutuila.

Some of the family members, friends, and supporters who attended last Saturday’s news media event, where it was officially declared that I’aulualo Fa’afetai Talia, candidate for governor, and Tapa’au Dr. Dan Mageo Aga, candidate for lieutenant governor, will be running in the 2020 gubernatorial race. [photo: FS]