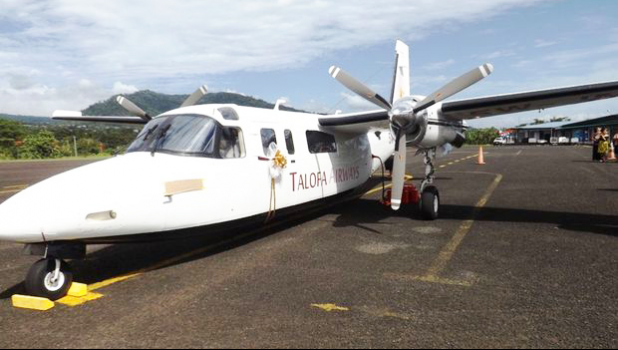 Pago Pago, AMERICAN SAMOA — Samoa-based Talofa Airways will be joining the Samoa government-owned Samoa Airways in providing American Samoa’s domestic flights to and from Manu’a, following approval yesterday by the US Department of Transportation (DOT) of Talofa Airways’ application.

The airline, through its Washington D.C. attorneys requested last month an expedited processing of its application which states in part, that a grant of exemption under federal cabotage is in the public interest, and will prevent undue hardship to the residents of American Samoa.

Talofa Airways said it plans to initiate this service on or about October 26, 2020, and requests that this exemption be granted for an initial period of 30 days. It also provided letters of support from territorial leaders that were written last year.

The airline had proposed to tentatively operate Monday through Friday service from Pago Pago to Ta’u Island, with initially up to two flights on each such day using its 9-seat Twin Commander 690B aircraft — one departure in the mid-morning and the second departure in the mid-afternoon. The airline’s application made no mention of Ofu flights. (See Samoa News edition Sept. 9th for details.)

In it’s three-page decision yesterday, USDOT assistant secretary for Aviation and International Affairs, Joel Szabat said the federal agency is granting the airline’s request “to operate its proposed intra-American Samoa services, using its 9-seat Twin Commander 690B aircraft, for a period of 30 days, that is, October 26, 2020, through November 24, 2020, or until five days after a U.S. carrier initiates intra-American Samoa passenger operations, whichever occurs first.”

Szabat points out that the grant of exemption — for an initial 30-day period — is in the public interest.

“Specifically, we were persuaded that the longstanding absence of U.S. carrier passenger service in the market at issue, along with the assertions made on the record by multiple representatives of the Government of American Samoa that an additional foreign air carrier’s services are necessary to meet the critical transportation needs of American Samoa, constitute an emergency created by unusual circumstances not arising in the normal course of business,” Szabat notes.

“Moreover, based on the representations of the U.S. carriers, we concluded that no U.S. carrier had aircraft available that could be used to conduct the operations at issue here,” he said.  “We also found that grant of this authority would prevent unreasonable hardship to American Samoa and its residents.”

A footnote in the USDOT decision states that should Talofa Airways seek renewal of this authority in the future, amendment to federal law in 2018 authorizes the federal department to renew for not more than 180 days cabotage exemptions to sustain air transportation between Tutuila and the Manu’a island group.

As the USDOT decision was released yesterday morning, Talofa Airways is expected to issue an official announcement soon on its proposed Manu’a flights.