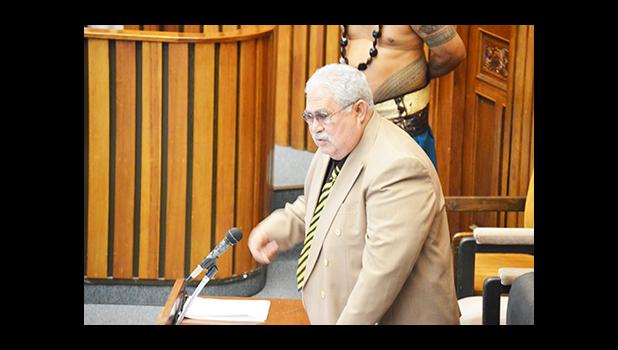 Pago Pago, AMERICAN SAMOA — While an Administration bill seeks to prohibit Immigration Board members from sponsoring foreigners to avoid conflict of interest, some senators argued that it still does not address another conflict, if the board member transfers the sponsorship to a spouse or adult children eligible to be a sponsor.

Another concern from senators is the Administration moving to delete a provision of the law, which currently allows the Immigration Board members to select their own chairman, with Attorney General, Fainu’ulelei Falefatu Alailima-Utu saying that both matters can be addressed through the Administrative Rules process.

These are a few issues raised by senators during last Thursday’s Senate Judiciary Committee hearing on the admin bill seeking to amend current law by prohibiting a board member from sponsoring a foreigner, staggered terms for board members, and deleting a provision of the law calling for the board to elect its chairman annually.

Responding to the opening statement from committee chairman, Sen. Tuiagamoa Tavai, the Attorney General said he has already discussed the bill with the Immigration Board, which is supportive of the proposed amendments to current law.

And while he is not sure if any current board members are sponsors of immigrants, Alailima-Utu said this information can be confirmed with the Immigration Office, which has the list of all sponsors.

Sen. Fai’ivae Iuli Godinet acknowledged the Administration’s goal prohibiting board members from sponsoring foreigners to avoid conflict of interest, but he said there remains another “conflict” — that is of a board member transferring sponsorship to the spouse or adult children if the current proposal is enacted into law.

Alailima-Utu noted the bill does not address the board member transferring sponsorship to the spouse or adult children. However, he has discussed with the board the issue of conflict of interest, and that if any board member is related to a sponsorship-case that comes before them, that board member would recuse themselves from the final decision-making process.

Fai’ivae pointed out that  is of the opinion that under the intention of the proposed amendment the issue of conflict of interest remains unresolved — because a sitting board member can still transfer sponsorship to the spouse or adult children.

“I’m just speaking of what to expect in instances like this,” he said. “It’s the reality for us.”

Fai’ivae says that this is his opinion on the matter, and perhaps, the current law should have been left in place as is, and the board member can recuse him or herself when they have a “conflict of interest” issue.

The “bottom line” and what is important is to avoid conflict of interest and the Administrative Rules can be adopted to address what Fai’ivae had mentioned, said Alailima-Utu.

Senate President Tuaolo Manaia Fruean, followed up on Fai’ivae’s query and sought further clarification. “If I am a member of the board, can my wife sponsor a [foreigner]?” Tuaolo asked to which the Alailima-Utu responded “yes” and reiterated that the Administrative Rule process can address such an issue which can be discussed with the board and even the governor before moving forward.

Sen. Magalei Logovi’i pointed to a provision of the bill, which deletes the authority of the board to select the chairman annually. He asked who will be given that authority.

The Attorney General responded, it’s the board. He explained that the Administrative Rule can be adopted, giving the board that authority as well as the specific month of the year for the selection process.

However, he said it’s up to the Senate if they still want to keep this provision in place, instead of removing it from current law.

Other senators believe this provision should be kept in place and not removed. Some of them echoed concerns raised by Fai’ivae and Tuaolo on the issue of a board member’s spouse being a sponsor of a foreigner.

The bill also says that any person appointed to the board while they are the sponsor of a foreigner must end the sponsorship within 60-days of appointment. Additionally, any board member who becomes a sponsor or who is still a sponsor more than 60-days after their appointment shall be removed by the governor.

According to the bill, the 7 at-large members of the board shall serve for “staggered terms that are not to exceed” 5 years.

Fai’ivae and Tuaolo also raised directly with the Attorney General, a long standing concern over the years from lawmakers, regarding the many Asian operated stores on island. And these stores employ Asians who don’t speak or understand English or Samoan, making it very difficult for Samoan customers to communicate with the Asian workers.

Fai’ivae points out that the intention of the law allowing foreign-owned corporations in the territory is to create jobs for American Samoans, but that is no longer the case. He said that if a Samoan is employed, it’s usually as a guard or watchman, while foreigners take over all other jobs, including as janitor.

Tuaolo shared with the attorney general, reports and information he has received. According to the Senate President, foreign corporation certificates are being issued in exchange for payments of up to $5,000.

He said there are many Asians in the territory and these foreign corporations are responsible for it.

Tuiagamoa, the committee chair, also agreed with Fai’ivae’s and Tuaolo’s concerns — as well as other senators. In the end, the committee agreed no action would be taken on the bill, with Tuiagamoa advising Alailima-Utu to revise the bill allowing the board to select its own chairman.