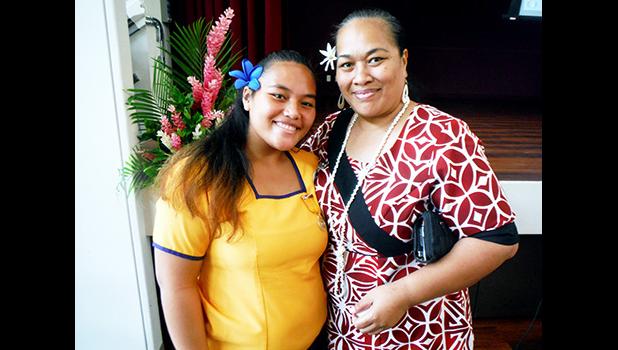 Pago Pago, AMERICAN SAMOA — The Alpha Epsilon Mu Chapter of the Phi Theta Kappa (PTK) International Honor Society at the American Samoa Community College (ASCC) holds an induction ceremony during each Spring and Fall semester to welcome some of the “best and the brightest” academic achievers into its ranks.

The fall 2019 induction ceremony, which took place this past Thursday, marked an especially significant milestone as the 40th anniversary of the PTK’s presence at ASCC since its introduction in 1979.

The PTK, an international honor society of two-year colleges and academic programs, particularly community colleges, is headquartered in Jackson, Mississippi and has more than two million members in more than 1,250 chapters in each state of the United States, the U.S. territories, the British Virgin Islands, Canada, Germany, the United Arab Emirates, and Peru.

The PTK recognizes and encourages scholarship among two-year college students by providing opportunities for the development of leadership and service. It also provides more than $35 million worth of scholarships annually to students nationwide. Each member is enrolled in the PTK Transfer Database, which links senior institutions across the nation offering scholarships to PTK members.

The theme for last week’s PTK induction ceremony, “40 Years of Honor and Excellence at ASCC”, reflecting the four decades the College has enjoyed a fruitful association with the honor society. Guests including ASCC president Dr. Rosevonne Pato; vice president of Academic Affairs Letupu Moananu; vice president of Administrative Services Sonny Leomiti; and the family and friends of the Fall 2019 inductees filled the auditorium of the College’s Multi-Purpose Center for the mid-day event.

Daniel Helsham, an ASCC graduate and former PTK member who currently serves as media specialist at the College’s Agriculture, Community and Natural Resources (ACNR)/Land Grant Division, provided the keynote address for the ceremony. In keeping with the theme of the event, Helsham spoke of the challenges and rewards of maintaining the character qualities of honor and excellence fostered by the PTK, not only during an individual’s college years but afterwards as well.

Helsham’s address was followed by the ceremonial lighting of candles representing the mythical Greek “Flame of Knowledge”. After being called one-by-one to receive their society stolls and certificates of membership, the inductees recited the PTK oath and pledge as a group, which completed the process of them becoming fully-fledged members.

Every semester, PTK advisors Kuki Tuiasosopo, Ernie Seiuli and Amete Moefiainu review scholastic achievement records and other relevant data to determine which students qualify for PTK membership.  Candidates must have taken at least 12 credits, passed their English 150, English 151 and Math 90 classes, and have earned a cumulative grade point average of 3.5 or higher.  Qualifying students receive an invitation to join PTK, and most of those invited readily accept the offer.

For more information about the nationwide activities of Phi Theta Kappa, visit their website at: <www.ptk.org>