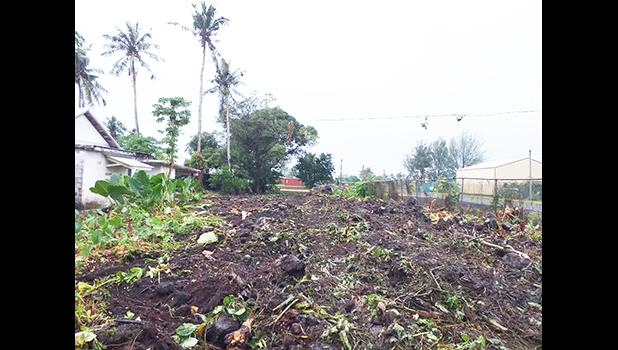 No word from ASG about this was “unkind, felonious, and shameful”
By
Fili Sagapolutele
fili@samoanews.com

Pago Pago, AMERICAN SAMOA — Local official with the U.S National Oceanic & Atmospheric Administration (NOAA) and two ASG cabinet members  “have smoothed things over” during a meeting yesterday, following the destruction of a federal government project — established eight-years ago — at the NOAA compound on Tasi Street at the Tafuna government housing property across from Lions Park.

This is according to NOAA official, Gataivai Manu Talamoa, the Logistics Management Specialist of the Pacific Islands Fisheries Science Center, Science Operations Division in the territory — who met with ASG Commerce director Keniseli Lafaele and Administrative Services (DAS) acting director Eliki Afalava who was accused earlier in the week by Talamoa of authorizing the destruction of the marine debris management and assessment program (MDMAP) platform site.

The accusation of Afalava allegedly ordering the destruction of federal property was outlined in an email Tuesday night sent by Talamoa to the acting director. Samoa News obtained a copy of the email message on Wednesday evening, which included two photos of the destroyed platform.

“Data that we have now collected from the platform is now useless because the entire [platform] is gone,” Talamoa told Samoa News in a brief phone interview following the meeting yesterday morning with Lafaele and Afalava. “The meeting went well and they have now learned about the science studies, such as ozone research, that we do here.”

According to the email message from Talamoa to Afalava on Tuesday night, a meeting was set for yesterday morning after Afalava reached out to Talamoa to meet pertaining to the NOAA  buildings on Tasi Street in Tafuna.

Talamoa informed Afalava that “while we were out at the NOAA Observatory in Tula conducting the scientific mission we accomplish here everyday... you authorized the owner of Happy Trucking to destroy our marine debris science research platform and what remained of the security fence on this our home and Federal Government compound.”

(Samoa News notes that Happy Trucking is the ASG contractor for the Tasi Street extension project, which was dedicated Monday this week. ASG source says the same company is also contracted to upgrade the current status of Tasi Street, which runs in to the Lions Park.)

In his email message, Talamoa explained that the federal agency’s scientific mission on island everyday “supports climate change, global warming and other environmental sciences, beneficial to American Samoa, the United States and all our many global partners.”

Talamoa pointed out that the six buildings on this compound continue to be listed on the registry of federal government real property to include “our current lease of this 2.57 acre compound. If I may add, the best maintained grounds from Tasi Street to the Nu'uuli VoTech High School fence, no ASG grounds even come close.”

Regarding the destruction of the platform, Talamoa tells Afalava that this is “unkind, felonious, and shameful that you did not come and meet with us before this destruction of a... Federal Government Science, Technology, Engineering, Mechanics/Mathematics (STEM) platform.

“These grounds serve as our homes too,” he said and mentioned the names of the local NOAA personnel whose homes are on this compound, including Talamoa’s. “Our days are long and sometimes systems failures make them extremely challenging, coming home to this, well this is just outright sad.”

Responding to Samoa News email questions after yesterday’s morning meeting, Talamoa said “NOAA and ASG representatives have smoothed things over and will work together to reach satisfactory results.”

He said NOAA will provide ASG “with proposals on our future needs for a portion of the 2.607 acre compound, we will also provide a write-up of the work that our NOAA Departments accomplish in American Samoa and a presentation on the various scientific studies that we do here in American Samoa that benefit our global community and partners.”