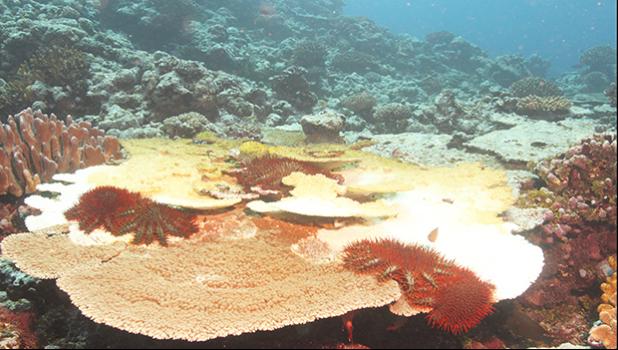 PAGO PAGO, American Samoa — Alamea (crown of thorns starfish) is native to American Samoa reefs, but in the last few years have been seen in alarmingly high numbers.

The National Park of American Samoa, along with other agencies including ASG Department of Marine and Wildlife Resources and NOAA/National Marine Sanctuaries have been working to control the alamea population outbreaks around the island of Tutuila.

“The National Park of American Samoa is honored to be part of the effort to protect and preserve our local reefs,” said Superintendent Scott Burch. “Controlling the latest alamea outbreak has been a particularly challenging yet successful project implemented by our staff and our partners.”

Since 2013, the park’s Marine Crew has killed more than 25,000 of the venomous starfish; and due to their efforts, alamea populations within the National Park have returned to normal levels.

Alamea feed on coral polyps, killing the coral and leaving behind only a white skeleton. This skeleton is often quickly overgrown by algae, preventing the coral from growing back.

Even if conditions are ideal, it can take up to 50 years for a coral reef to recover from alamea outbreaks, with natural disturbances like cyclones making it even more difficult for the reef to recover.

The reason for the alamea outbreak is thought to be due to high levels of land based nutrients in the nearshore waters.

These nutrients can come from excess fertilizer on crops, leaking septic systems, wet litter piggeries, and other sources that are transported by rainfall into the ocean. They allow phytoplankton, a microscopic marine plant, to flourish. When phytoplankton levels are high, alamea larvae have more food and can grow quickly, resulting in more starfish surviving to adulthood and ultimately leading to an outbreak.

The most recent outbreak was first noticed by researchers in 2011 on the south side of Tutuila and quickly spread to the north side of the island by 2013. Heavy outbreaks were detected near the villages of Fagasa, Faga’malo, and Vatia.

Although outbreaks have occurred in the past, this was the first time that the outbreak had been monitored and systematic control efforts initiated.

In some areas the outbreaks were so dense that National Park divers encountered and were able to kill 952 alamea in a single day.

“Hats off to our marine crew for professionally and effectively managing such a huge outbreak. Their dedication to this effort has been tremendous and we will continue to monitor the reefs for future outbreaks,“ said National Park Dive Officer Bert Fuiava.

Monitoring for alamea within and adjacent to the National Park indicates that the outbreak has been contained within these waters. However, more monitoring is needed throughout the reefs around Tutuila to understand the status of the current outbreak.

It is up to all of us to help protect our reefs from these threats. If you see large numbers of alamea on the reef, please report the location to the Department of Marine and Wildlife Resources (DMWR) at 633-4456.