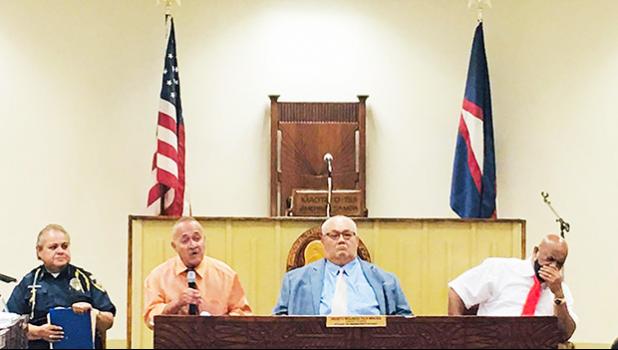 Pago Pago, AMERICAN SAMOA — With the House of Representatives calling for the Department of Public Safety (DPS) to close down the well known locations where crystal methamphetamine or “ice” is sold in the territory, a hearing this week before House Public Safety Committee was called and revealed news that the FBI had been called in to take over the investigation of illegal drugs found in the LBJ Hospital mail in May of 2018.

During the hearing, Vice Speaker of the House, Rep. Fetu Fetui Jr said that the motive behind the hearing, was not only to find solutions to the increasing drug problem in the territory, but for the Fono to have a clear picture on the outcome of police investigations on some of the drugs cases a few years ago while Le’i Sonny Thompson was Police Commissioner.

In response to Fetu’s question regarding seven packages containing crystalline substance that were discovered in the LBJ Hospital’s mail in May of 2018, Falana’ipupu explained that the Federal Bureau Investigation (FBI) is handling the case right now.

Falana’ipupu explained that an investigation was carried out by the DPS Vice & Narcotics Unit (VNU) immediately after the case was discovered at the LBJ Hospital. A few months into the investigation, investigators for the VNU discovered new information regarding the case and decided that they needed further resources to complete the investigation.

A discussion was initiated between DPS and the Attorney General’s office, which later advised DPS to seek assistance from the FBI.

According to Falana’ipupu, FBI agents flew down to American Samoa on Sept. 27, 2018 and all the information regarding the case, including the report from the initial investigation and evidence were handed over to the FBI agents and they carried everything with them off island.

Last year, DPS executed search warrants from the FBI at two locations in the territory. The investigation is still on going.

Saole Representative, Titiali’i Kitara Vaiau voiced his concern over the increase drug in cases in the territory. Titiali’i said that almost every day he reads in the Samoa News about people being arrested and charged for unlawful possession of methamphetamine or marijuana.

He further stated that almost everyone arrested for violating local drug laws told police that he bough drugs from either Le Aute or Le Filifili.

“We need to close these two places down because this is the root of the problem. The drug problem in the territory is real and it is getting worse everyday,” Titiali’i said.

Titialii’s question was a follow up question from a statement made by Representatives from Manu’a, Rep. Alumamalu Ale Filoiali’i and Rep. Tiaoali’i Fau Sai on why it is taking so many years to do something to solve the drug problem in the territory.

Alumamalu said that drug problem is not a new issue. It’s been going on in the territory for many years now but it seems like nothing has been done to stop drugs from entering the territory.

“Drugs are not a new issue — but I don’t understand why it takes ten years to solve it,” Alumamalu said, adding that “the only way to tackle the increase of drugs in the territory is to destroy the roots of the problem.”

Rep. Tiaoalii said nearly every elementary school student knows the two spots where ice is being sold and distributed and it’s time for DPS to shut it down.

He didn’t mention the two locations by name but it’s certain that he was referring to Le Aute and Filifili, which have been named in many drug related court cases.

Tiaoali’i told DPS officials that the Manu’a islands are also suffering due to the increase of the drug problem here on Tutuila island.

According to Tiaoali’i, a man was arrested as he was ready to board an alia boat with a load of illegal drugs and weapons ready to be transported to the Manu’a islands. While that man was in custody, no drugs were seen in Manu’a, however, the man is now released back to the community after his case was dismissed by the court and the drug problem in Manu’a has now started to grow again because of this man, Tiaoali’I alleged.

According to Tiaoali’i, the man he is referring to is bringing marijuana and methamphetamine into the Manu’a islands and he (Tiaoali’i) is very concerned with the future of the young people. He asked DPS leaders to act now before it’s too late.

Vaifanuatele Representative, Lavea F. P. Mauga echoed remarks made by Titiali’i at the start of the hearing, saying that ice has spread like an epidemic in the territory and it is wreaking havoc on families. He urged that DPS to act now to destroy the well-known locations where drugs are being distributed and sold.

Vice Speaker Fetu said there are reports that ice is being manufactured or “cooked” on island but didn’t get a confirmation from the DPS officials.

Rep. Vailiuama Steve Leasiolagi stated there are almost daily reports in the newspaper about suspects caught with drugs being arrested and prosecuted. He said the sources of drug supplies in the territory are well known as they are mentioned in the newspaper reports of drug cases - Aute and Filifili.

“Why is it so hard for you to shutdown the two main sources of drugs in the territory, the Aute and Le Filifili?” Vailiuama asked, adding that he personally sees it getting worse in many villages and lives of many young people are also affected because of the drug problem.

Fetu says drugs have affected our children, churches and even the government. But the territory doesn’t have any plans to respond to the problem.

“Our families are being ravaged by drug use and abuse. Specifically drugs are destroying the futures of many of our young people. We must take immediate action to battle this epidemic and while we may have government and private programs operating, we need to combine resources and tackle the problem in its entirety,” Fetu said.

It was May of 2018 the CEO of the LBJ Hospital in American Samoa confirmed to Samoa News the discovery of drugs in the hospital mail.

The packages were addressed to various divisions of the hospital including the Nursing division, the Tafuna Health Center and the Department of Health.

Hospital CEO, Faumuina John Faumuina, said one package was delivered by the Procurement Department to the Nursing Department, who returned it saying, "They were not aware of such an order."

Faumuina said that was when Procurement contacted his office over their suspicions about the package.

The CEO immediately contacted police and the other packages were found.

Faumauina said he was saddened by the incident and disappointed that people tried to use LBJ as an avenue to smuggle drugs into the territory. The drugs were reportedly valued at $420,000.

The report submitted to faipule by DPS revealed a steady increase in drug cases prosecuted by ASG.

In 2018, 65 drugs cases were prosecuted including 6 cases from the U.S Post Office — 35 cases involving methamphetamine while 30 cases involved marijuana.