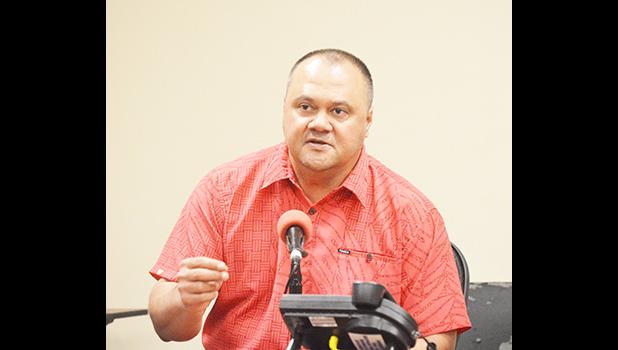 Pago Pago, AMERICAN SAMOA — The American Samoa COVID-19 Task Force is appealing to the public to get their COVID-19 shot to protect themselves from the coronavirus.

Chairman of the Task Force Lt. Governor Talauega Eleasalo Ale stated during a press conference with members of the local media yesterday at the Department of Homeland Security Conference Room that according to their records, it’s been 7 months now since American Samoa has started its COVID-19 vaccine campaign but the percentages of those who has already gotten their shots is still very low.

So far, around 24,000 people in American Samoa have been vaccinated at least once, which is 65% of those who are eligible to get the vaccine. Only 57% of those who have had the first and second doses.

The Task Force is pressing for members of the community to go to any of the locations where the Department of Public Health is set up to administer the shots.

“Prevention is better than cure and we don’t want to see our loved ones affected and dying from the deadly virus,” Talauega said.

“Think about yourself and your family, our country and the whole community. If someone has the virus and there are a lot of us who did not get the shot, our community would face a big problem in the future.”

Other members of the Task Force echoed Talauega’s statement regarding the importance of getting the shot. They stressed that the vaccine can prevent severe illness from the virus.

It was also discussed during the press conference that there is a new variant of the new virus called, ‘Delta’ which has been detected in Hawaii. Dr. Aifili Tufa confirmed it.

He stated the Delta variant is in Hawaii, however, the good news is that, there’s still evidence showing that if you get your shots if you are fully vaccinated especially with the ‘Pfizer vaccine’ you are protected from these new variants.

“But here’s one thing that we all have to remember, the reason why Delta variant came about is because of the ability of the virus to transmit from person to person.

“As the virus moves from person to person chances of a new variant developing increases, so the one way for us to stop this from happening is to get vaccinated. If we stop the virus in its tracks, it also stops or minimizes chances of this virus moving to new variants or even developing a new strain,” Dr. Tufa said.

He stated that there is a worry that if the Delta variant does get here and the number of people vaccinated is still low, that the delta variant can spread pretty quickly here to those who're not vaccinated.

“However, when you are vaccinated, it shows that with the ‘Pfizer vaccine’ that first shot will protect you 33% of the time. If you get both shots, that protection will go up to 88%. Now, what does that mean? It means that for those who had the vaccine the chances of you developing severe disease and death is much, much lower compared to those with no vaccine.”

Dr. Tufa said that is why we are pressing our people to please come in and get their shots because that is the only way for us to protect right now.

Another thing is, we don’t have the virus here on island and it’s very hard for us to really see how effective these shots are here because we don’t see it.

What the record is showing right now is if you have your shot your chances of getting a severe disease and dying from COVID-19 is close to zero percent (0%).

“So this is the information we need to make clear to everybody in our community that the number of people who have died around the world are those people who did not have the shot, it’s not those who had the shot,” Dr. Tufa said.

Reports from media in Hawaii state that the Delta variant of the coronavirus, which may spread more easily and cause more severe illness, has been detected in Hawaii, according to the Hawaii Department of Health.

The variant was detected in a specimen from a fully vaccinated Oahu resident who traveled to Nevada in early May and who had a negative COVID test prior to returning to Hawaii. Several days after returning to Hawaii, the person developed mild symptoms consistent with a COVID infection and subsequently tested positive for the virus. There is no evidence that the person passed on the virus to household members and close contacts who were quarantined.

Talaueag also informed the public that due to the high demand of off-island medical referral requests from the LBJ Hospital, the Task Force has approved a special Medicaid charter for June 24, 2021. The three flights scheduled for the month of June and July are fully booked with standby lists, thus the medical charter will prioritize off-island medical referral patients.

Because the charter is only transporting passengers one-way, a cost share will be assessed on non-Medicaid eligible passengers.

This medical charter will only transport passengers one-way from Pago to Honolulu. It will travel empty from Honolulu with only a Hawaiian Airlines flight crew to American Samoa, to retrieve medical referral patients.