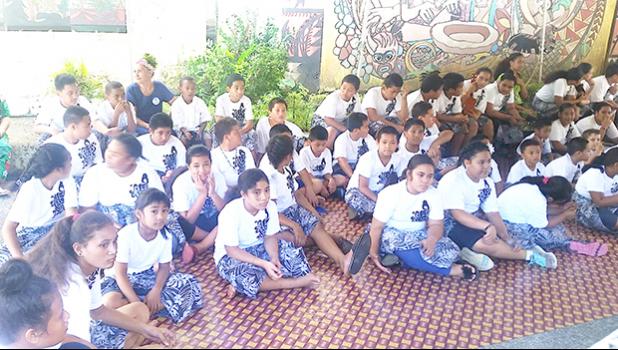 One of our islands’ most consistent and valuable summer programs came to a close last Friday, after the participants wowed their parents and teachers with special performances, bringing to life some of the many things they learned over the past month.

The Children's Cultural Maintenance Summer Program is an annual event — the oldest of its kind in the territory — that has been up and running for about three decades. Even some grandparents who participated in the program during their younger years are now dropping off their grandkids to learn the same things they were taught back then.

Program director Rex Yandall told Samoa News that the “main purpose of the program is to maintain the culture of Samoa through the arts.”

The program accepts 6-18 year olds and on occasion — even adults — who are interested in learning about the Samoan culture.

Over a span of three weeks, the estimated 70 participants were exposed to various things ranging from ukulele lessons, weaving and drawing, learning how to properly speak and understand the Samoan language, and performing the traditional Samoan siva.

Youngsters also learned about Samoan myths and legends, but perhaps most importantly, they were taught morals and principles based on the Samoan way of life.

This year’s program is particularly different from years prior because there was a notable increase in the number of different races and ethnic backgrounds represented.

Samoa News discovered that not only were there kids from the United States, there were also participants from Papua New Guinea and Fiji.

The Children's Cultural Maintenance Summer Program is sponsored by the National Endowment for the Arts in Washington D.C.

This past Friday was the last day for this year’s program; and parents got a treat when the kids came ready and pumped up for performance day, the one chance they get to showcase what they learned during the summer.

The program kicked off at 9 a.m. and included skits, ukulele playing, and even a fire knife dance performance.

The taualuga definitely brought the house down, with screaming that could be heard across the street at the Post Office.

Proud parents, family members, and even the summer program teachers beamed with pride as they witnessed the fruits of their labor.

The kids’ love of culture shined through their natural ability to perform and capture the audience.

Proud father Ernie Seva’aetasi told Samoa News that his daughter has been in the program from three years now and she really enjoys it. He said his daughter has learned a lot and he enjoys listening to her play the ukulele everyday.

The teachers who work for the cultural program are seasonal volunteers. Most of them are elderly women who weave and produce handicraft items at the Fale Samoa in front of the Museum.

Perhaps the only thing better than the kids learning new things during the summer program, is the bond they have created with others and the many new friendships that have been formed.

Most of the kids told Samoa News that they look forward to coming back next summer.

“I really like it here because everybody is nice,” said Ulutaumamao F., one of the program participants. “The program really turned out good for me, and my favorite classes are Ukulele, Samoan Culture, and Carving. I really do like it here.”

The Children's Cultural Maintenance Summer Program has been one of the best and most successful programs this year because of the significance and value of what is taught to the kids and the impact it has in their lives.