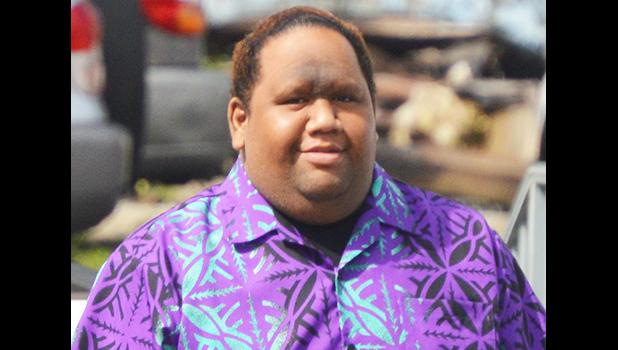 Pago Pago, AMERICAN SAMOA — The government's case against a local Gospel musician and former music teacher at Leone High School (LHS) — accused of allegedly having a sexual relationship with a male student who later contracted a sexually transmitted disease — was dismissed with prejudice by the High Court yesterday morning.

Elijah Jared Tavai was in tears when Associate Justice Fiti Sunia granted the motion to dismiss his case. His parents, who were present in court along with other family members, were also in tears when they heard the court’s decision.

Tavai hugged his defense attorney, Marcellus Talaimalo Uiagalelei before he hugged his parents.

He was scheduled to appear yesterday morning for a jury trial; however, prosecutor Assistant Attorney General Laura Garvey filed a motion on Mar. 29 to dismiss the case without prejudice.

Defense attorney Uiagalelei filed a response to the motion on Apr. 5th, asking the court to dismiss the case with prejudice.

Tavai, who was out on a $5,000 surety bond, was arrested on Oct. 10, 2017 pursuant to an arrest warrant by the District Court on charges of abuse of a child (a felony punishable by imprisonment of up to five years, a fine of up to $5,000 or both); and two misdemeanors: endangering the welfare of a child, and patronizing prostitution.

According to the government, the dismissal was sought because the victim currently resides off-island and is unable to return to testify. The government said it cannot meet its burden and prove its case without the victim’s testimony.

In the defense’s response, Uiagalelei referred to relevant information he felt the court should consider in dismissing the case with prejudice. He said that during a final status hearing for on Mar. 22, 2019, both parties assured the court that they were ready for trial.

Uiagalelei said that since his client’s arrest, Tavai has been unable to travel off island without the court’s approval, and has been terminated from his job. His life has been on hold until these matters are cleared. Uiagalelei argued that the government’s motion does not indicate a defined date as to when the alleged victim may be returning to American Samoa.

“The defendant has been in the clutch of the government since October 2017. During that time, defendant has had to endure hardships that usually come with an accusation of sexual misconduct…” Uiagalelei said in his motion.

He said that under the Revised Constitution of American Samoa, it is clearly guaranteed that every criminal defendant has the right to a speedy and public trial. For the defendant’s case, this matter has been pending for over a year.

Uiagalelei said his client does not object to the government’s motion to dismiss, however, given the time that has lapsed, the hardships his client has suffered since October 2017, and the prejudice that he will suffer so long as the government can bring this back, a dismissal with prejudice must be ordered.

He added that while it is an appropriate basis for dismissal, the government does not offer any further information on when the alleged victim will return or if he even intends to return to American Samoa.

“Surely the defendant cannot be expected to continue to live his life in this current state. Wherefore, defendant urges the court to dismiss this matter with prejudice."

Yesterday morning, Garvey told the court that they just found out a few weeks ago that the victim is on a missionary trip to Utah with his mother, and they are not sure whether he is coming back or not.

Sunia wanted to know when the government found out that the victim left the island. He said the court issued a subpoena for the victim on Mar. 28, 2019.

Garvey said they were made aware on Mar. 26 through a movement report, which shows that the victim left the territory on Feb. 18, 2019.

She said it was during Tavai's initial appearance back in 2017 when the government received information about the possibility of the victim departing the territory for a missionary trip.

According to Sunia, it's obvious to the court that the government was aware of the possibility that the victim would leave the island since the case was initially filed in District Court; however, the government never bothered to take any action, including a motion to dismiss the case in the early stages.

According to the government’s case, on April 28, 2017, an official from the Department of Education (DOE) reported a criminal matter that was relayed to the DOE main office, involving an unknown minor testing positive for a sexually transmitted disease (STD).

The DOE official never disclosed the victim’s name during the initial conversation with the CID detective. Only the name of the defendant was revealed. DPS finally identified the minor on Aug. 30th. The following day, officers interviewed the main witness in the case, a teacher from Leone High School, who told police that it was sometime during the first week of February 2017 that the minor asked him a question about STDs. The minor allegedly told the witness that he was experiencing symptoms associated with STDs.

The witness told the minor he needed to see a doctor and get tested and according to the witness, the minor was adamant about not letting his parents know, and asked the witness if he could take him.

The witness and the minor's older brother escorted the minor to get tested. Testing was conducted and during a follow-up visit a few days later, the minor was treated with a shot and pills.

According to court documents, the minor confessed to the witness that he lied to the doctor about who his sexual partner was, because he was too ashamed to admit that it was a "mala" (fa'afafine or transgender).

The witness told police that a week later, he approached Tavai at the school and asked to speak to him. During the meeting, the witness asked Tavai if there was something he wanted to tell him.

According to the witness, Tavai didn't make any excuses and allegedly admitted and confessed that he had sexually assaulted a male student by performing oral sex on him.

Tavai allegedly told the witness that after “a moment of performing" oral sex on the student in his truck, the minor felt that it was wrong and stopped.