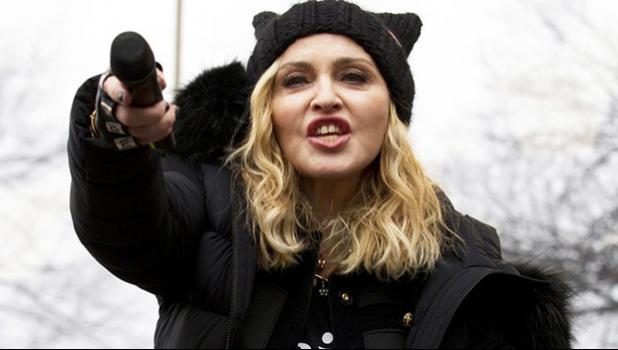 THE CLAIM: Madonna told Fox News: “I heavily regret my vote against Trump ... and I will vote for Trump in 2020.”

THE FACTS: Madonna, a vocal critic of President Donald Trump, has not changed her politics, as stated in a social media post being shared. Luke Burland, Madonna’s publicist, told The Associated Press on Tuesday that the post is “completely not true,” adding that Madonna “never did an interview with Fox.” The post, which consists of her picture alongside a quote said to be from a Sept. 5, 2018, Fox News interview, surfaced again recently after circulating on social media in September. Madonna has been an outspoken critic of Trump and opposed his candidacy. In 2016, she posted an Instagram story of a Trump piñata for her son’s birthday. She also posted a picture that year of Trump’s sons Donald Jr. and Eric during a hunting trip with the caption, “One more reason to vote for Hillary!”

THE CLAIM: Video shows French firefighters turning their backs and walking out on French President Emmanuel Macron during a ceremony.

THE FACTS: Macron was not at the event where firefighters were captured on video turning their backs on officials on Saturday, Dec. 1, but the video is real. Social media users began sharing the video with the false claim after grassroots demonstrations in France turned violent last weekend. The protests began as a response to Macron’s plan to increase the fuel tax. Sebastien Delavoux, secretary general of the local fire and rescue union, told The Associated Press that firefighters turned their backs toward their employers because they were angry that their yearslong concerns about staffing issues had not been addressed.

THE CLAIM: A social media post states: “If you need to call 911 but are scared to because of someone in the room, dial and ask for a pepperoni pizza. They will ask if you know you’re calling 911. Say yes, and continue pretending you’re making an order.You can ask how long it will take for the pizza to get to you, and they will tell you how far away a patrol unit is. Share this to save a life!!!”

THE FACTS: Dispatchers are not trained to interpret a takeout pizza order as a covert way of seeking emergency assistance. The claim has circulated on social media for several years. Christopher Carver, dispatch center operations director for the National Emergency Number Association, told The Associated Press in a statement that asking for a “pizza in emergency situations is not standard practice or procedure.” Carver said a dispatcher would not hang up upon hearing a pizza order, they would ask more questions to determine what is going on. But, he said, there is no single nationwide rule regarding what to do if someone calls ordering pizza. “Setting any expectations of secret phrases that will work with any 911 center is potentially very dangerous,” he said. Carver suggested that if someone is unable to speak on the phone a better option would be to text 911.

THE FACTS: Social media users are misrepresenting the video, falsely claiming it was taken during recent protests in France. The video actually shows people at a demonstration in London chanting for President Donald Trump. The video was taken June 9, 2018, during a rally held in support of Tommy Robinson, a right-wing activist who was jailed for contempt of court in England. In the video, a demonstrator wearing a Trump mask can be seen on top of a blue sightseeing bus trying to rally the crowd by chanting, “We want Trump!” Posts saying the video was taken during a French demonstration began circulating widely on social media after protests in France turned violent the weekend of Dec. 1.