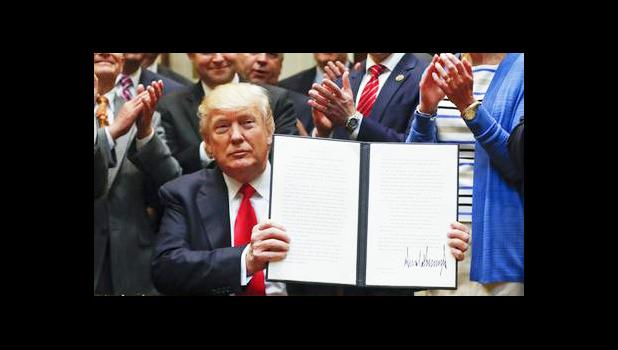 (AP) — A roundup of some of the most popular, but completely untrue, headlines of the week. None of these stories are legit, even though they were shared widely on social media. AP checked these out; here are the real facts:

THE FACTS: The story was shared by the St. George Gazette and attributed to The Associated Press. But the AP never ran such a story because the president gave no such order. A list of executive orders issued by Trump mentions nothing about bald eagles. Congress first outlawed the killing of the national bird in 1918. The St. George Gazette is an outlet of admitted hoax artist Paul Horner.

THE FACTS: A search of the federal court system shows no criminal cases pending against the Hungarian-American billionaire known to back liberal causes, despite a story posted by The People's Resistance that claimed Soros was federally indicted. The post included a photo that appeared to show Soros in a courtroom. The picture is actually a doctored image of a hacker being sentenced in June for stealing from a Soros foundation.

THE FACTS: NASA has been willing to pay people willing to stay in bed, but there was no marijuana involved in the offer. The space agency's website says bed rest studies give scientists information on how the body adapts to weightlessness. NASA spokesman William Jeffs tells the AP that the story is "absolutely untrue" and the agency hasn't conducted bed rest studies for some time.

NOT REAL: Donald Trump Praises Colonel Sanders for His Service in the Civil War

THE FACTS: The post from admitted satire site The Red Schtick said the president praised the Kentucky Fried Chicken founder as a "tremendous Civil War hero" who once saved an army at Valley Forge from starvation. Sanders was born 25 years after the war's end and died in 1980. The story circulated following Trump's May 1 assertion in an interview that President Andrew Jackson could have prevented the war, which began 16 years after Jackson's death.

THE FACTS: Fans of Murray, Jennifer Aniston, Matt Damon or scores of other celebrities may be upset to know that the stars aren't likely moving to a city near them. A series of stories posted on admitted hoax sites made up to look like local news outlets has celebrities moving to towns across North America, including Buffalo, New York; Janesville, Wisconsin; and Dothan, Alabama. Each story quotes the star mentioning that he or she is getting "a little tired of the L.A. lifestyle" and wants a big change in life.