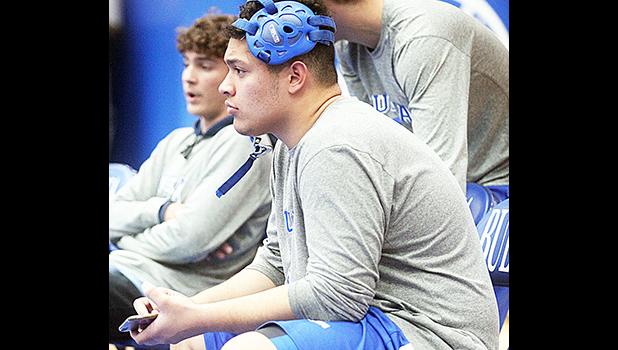 Sierra Visa, AZ — For Manaia Fruean, participating in Buena High School athletics was a way to make friends in his new school.

The senior moved to Sierra Vista roughly three-and-a-half years ago as the military brought him to the area. He has lived in Arizona, Washington and South Korea.

“I like it (being a child with a military parent),” Fruean said. “It (has allowed me) to meet new people (and) … experiencing new experiences.”

During his time at Buena, he was a linemen on the football team for three years, and is currently on the wrestling team for the second consecutive season.

“I like the intensity, but not only that, I like the bonding with your teammates,” Fruean said. “You make brand new friends, not just from this school, but from other schools, too. Usually when they call a penalty or whatever, we’re usually just standing there, so we usually talk with the other linemen and sometimes make jokes.”

Last football season, he had 48 tackles, including 25 solo stops. He finished his three-year career with 112 total tackles — 61 of the solo variety — and also added four sacks in 27 games.

With graduation looming, the moments on the field and the mat, as well as the friendships he has made, are what he will remember most about his time at Buena.

“The bonds we’ve created is very powerful,” the teenager said.

Fruean plans to continue his education after high school, and recently applied to the U.S. Naval Academy.