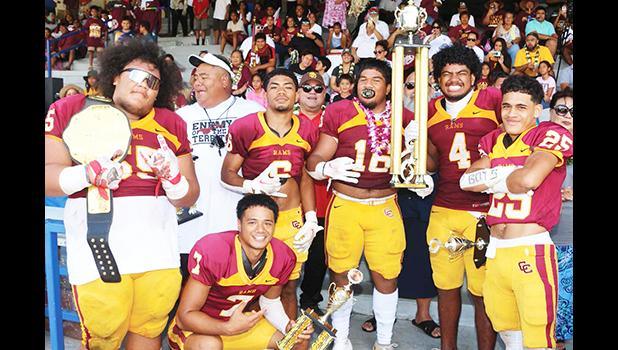 Pago Pago, AMERICAN SAMOA — Last Saturday, ASHSAA hosted this year's varsity football championship match, where Tafuna High School proved that they were still at the top of the sport in the territory.

After a second-half comeback that stunned the Lions to a halt while Tafuna collected their third championship title in a row – to become 3-Peat Champions.

Coverage of ASHSAA Football is proudly sponsored and brought to you by Congresswoman Uifa’atali Aumua Amata.

Early in the second quarter, Leone had Tafuna in a trance while moving the ball into Warrior territory and into the end zone, when Isaia Elisara sent Berea Te’o straight up the middle for a 2-yard touchdown reception, with 11:10 remaining in the first half of play.

Leone took the lead by 8 points after a play-action pass from Elisara to Jiovanni Siatini.

Not too long after that, Deacon Samoa who was at the helm for Tafuna’s offense led the Warriors into Lions territory and delivered six points after sending Chris Su’a up the middle for a 5-yard touchdown reception.

It was a tied match after a quarterback keeper by Metuliki Tupou put more points on the board for the Warriors, going into halftime.

The second half proved to be a defensive contest between both teams – It wasn’t until late in the third quarter, that the Lions again drew blood after a fourth-and-goal situation from Tafuna’s 15-yard line.

Elisara threaded a pass to Jiovanni Siatini on a slant route to put six more points on the board. Leone led 16-14 with just 21 seconds remaining in the quarter.

Tafuna didn’t hesitate to respond with a long run by Chris Su’a from their own 35-yard line to score another six points for Tafuna who came back and led the match 22 - 16 after a two-point conversion by Deacon Samoa with just 8 seconds remaining in the third.

The Warriors made two more end zone appearances by way of Deacon Samoa and Metuliki Tupou to claim their third championship title in a row with a 36 - 16 victory.

Most Valuable Player of the Game – (4) THS Metuliki Tupou