Sharks take down No. 1 Vikings in varsity showdown 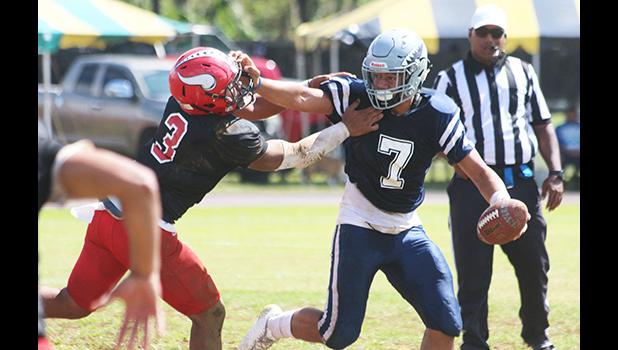 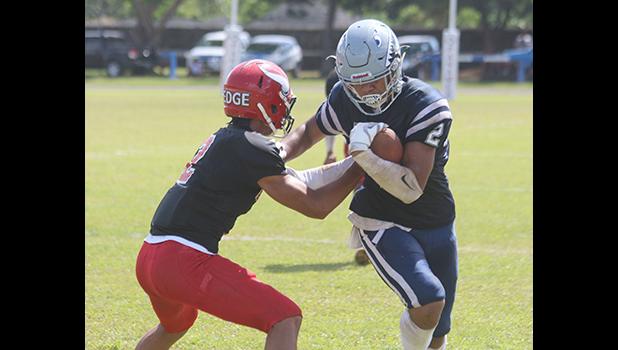 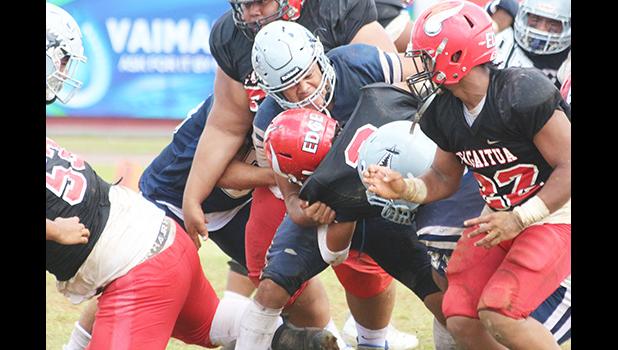 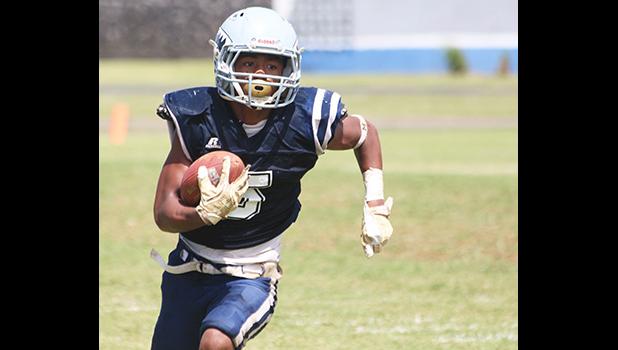 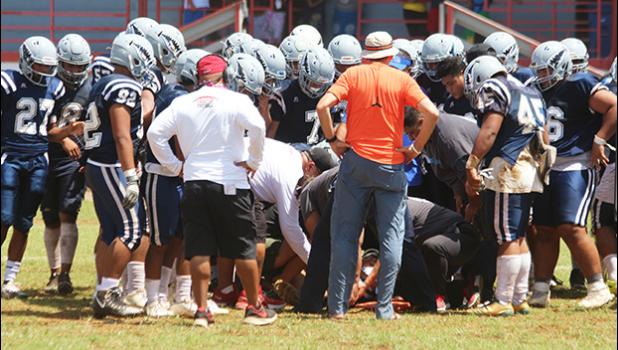 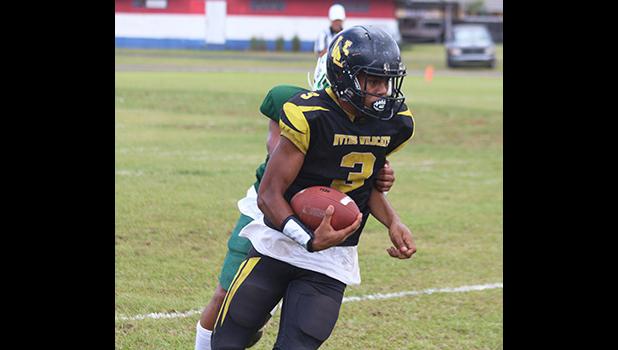 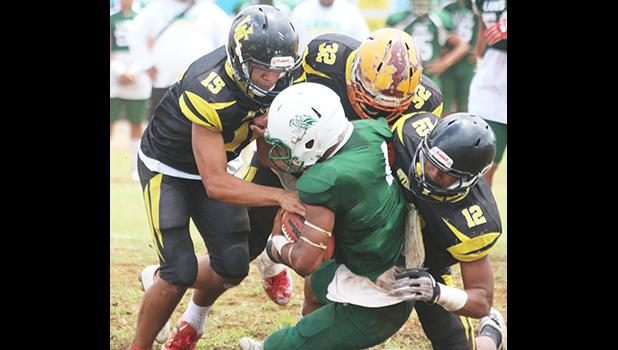 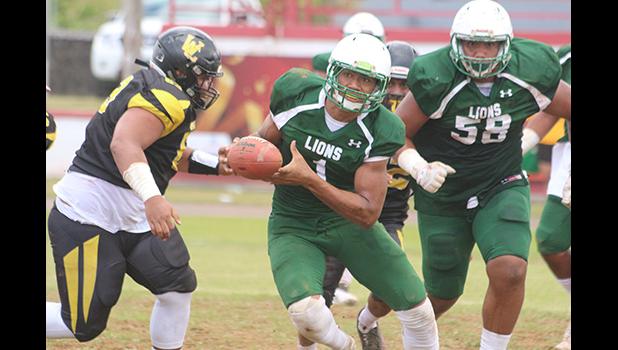 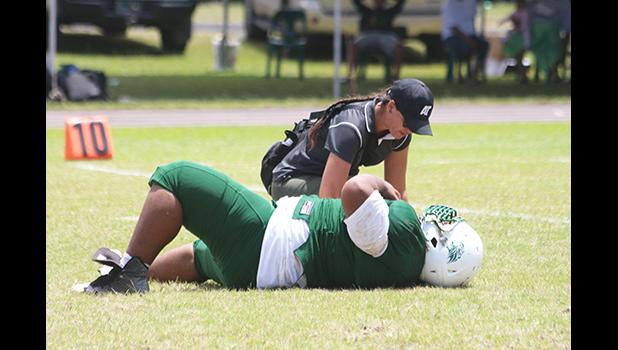 Leone defeats the Wildcats for their first win of the season
By
Tony Gasu
tony@samoanews.com

Pago Pago, AMERICAN SAMOA — Samoana’s head football coach Pati Pati and the Blue Empire showed up not only to collect their first win of the season, but to chop down the only undefeated team, the Faga’itua Vikings, in a jaw dropping 34-8 victory last Saturday at Veterans Memorial Stadium in the varsity division.

Now that there is no undefeated team in the division, there will be a play-off for this year’s ASHSAA football season. (Under ASHSAA, a team that remains undefeated to conclude the second round of competition is automatically crowned the champions. This is how Tafuna HS won the title last year.)

Coverage of ASHSAA football 2019-2020 is sponsored by Congresswoman Aumua Amata.

Week #4 kicked off with the JV showdown Thursday night between Samoana and Faga’itua, where head coach Sua’ese Pooch Ta’ase and the Vikings collected their second win of the season after a 30-22 victory.

It was Samoana’s defense that showcased their best against the Vikings.

5:39 in the opening quarter, just after Samoana turned the ball over on Faga’itua’s 15-yard line, a pitch play to Joseph Umu resulted in a 97-yard run, the opening touchdown of the game. It was 8-0 for the Vikings after a two point attempt by Manuita Sofeni.

Sharks’ defensive coordinator Nofo Sualevai was furious with his defense, and made sure they didn’t let up ever again throughout the remainder of the ball game – And his boys delivered.

Late in the first quarter, the Sharks kept the Vikings defense guessing. What should’ve been a running situation for Samoana turned to an ‘Air Attack’ after Viliamu Tanielu fired a bullet to Kobe Lefiti for a 3-yard touchdown reception.

Samoana opted for a field goal but Mikaele Tavai broke loose into the backfield and blocked the conversion to keep the Vikings up by two.

The Sharks were moving the ball on the ground to spot a third down at the 10-yard line, with seconds left in the half, when Tanielu fakes a pass out to Avery Seumanutafa, and looks to Kobe Lefiti who was waiting in the end zone after running a seam route to score Samoana’s second touchdown of the game.

The two point conversion was a shovel pass to Solo Solo that put the Sharks in the lead for the first time in the game 14-8. Early in the third quarter, Tanielu took the ball himself up midfield to score on a 30-yard reception to extend their lead 20-8.

As the Blue Empire defense was holding it down, their offensive unit turned up the heat going into the final quarter – 9:05 remaining in the ball game, and Tanielu marches into the end zone on a 2-yard reception to score his second touchdown of the day. The two point attempt, an inside hand off to Marcus Samia, extended their lead, 28-8.

The Vikings defensive unit continued to let up yards on penalties. Samoana’s first down at the 30-yard line and Tanielu fires a pass to Lefiti who hauls it in for a first down at the 1-yard line. From there, Tanielu pitches the ball out to Lefiti again on an option play to score. It was Lefiti’s third touchdown of the day and it was enough to close the game off at 34-8, Samoana’s first win of the season.

Lions head coach Jerome Fiatoa and his crew got their first victory of the season this past weekend.

Leone’s starting quarterback Tolutasi Aumua continues to be on the injured list and did not play last Saturday. The Lions then turned to Fa’alili Fa’amoe who got the job done.

The Lions scored their first touchdown of the game, after Fa’amoe executed a play action pass to his tight end (#80). The two point attempt was a pitch play out to Joshua Taani which put the Lions in the lead at 8 points with 5:11 remaining in the opening quarter.

Leone’s defensive unit pulled through during the first half and shut out the Wildcats completely, going into half time. Nu’uuli on the other hand, gave their best performance on defense by holding the Lions to 8 points into halftime.

Early in the 4th quarter, the Wildcats defense finally was able to put 6 on the board for Nu’uuli. After noticing that Fa’amoe’s passes to his receivers were nearly floaters, the Wildcats’ Calloway Alosio intercepted a pass intended for Joshua Elisara and turned it up to score on a 30-yard pick six for Nu’uuli’s first touchdown of the game.

Late in the ball game - Nu’uuli’s second down possession deep inside their territory -quarterback Palepua scrambles into the end zone trying to escape the pressure from the Lions defense. He was sacked in the end zone for a safety, putting two more points on the board for the Lions for a final score of 10-6.