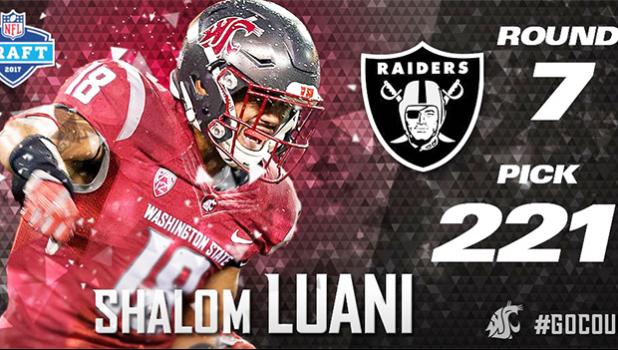 By
John Buhler, Fansided
Raiders safety Shalom Luani was a two-sport star growing up. Here is how being a former American Samoa national team player makes him better at safety.

Oakland Raiders’ seventh-round rookie safety Shalom Luani had an excellent first game for the Silver and Black against the Arizona Cardinals on Saturday night in the preseason. Luani registered six tackles, five solo, defended one pass and recovered a fumble. The former Washington State Cougars’ defensive back played with his head on a swivel in his impressive first game.

Luani’s path to the NFL is a different one to say the least. He grew up as a two-sport star in American Samoa, playing football and soccer. While he is known in Raider Nation as that promising ball-hawking safety out of Wazzu, back home Luani is an association football legend. Luani scored a goal in American Samoa’s first sanctioned FIFA win against Tonga back in 2011.

That was back in 2011, well before Luani had to make a choice about what sport to pick going forward. He picked football in 2012, choosing to play at Chabot College of California that summer. Luani would go to City College of San Francisco in 2013. By 2014, Luani was garnering big-time offers as a JUCO transfer.

Luani ended up signing with Mike Leach‘s Washington State program to play defensive back for the Cougars in the Pac-12. Washington State might be the smallest of the Pac-12 schools, but has had football success in the last 25 years. Overall, it was a good pick for Luani. His time with the Cougars helped him get drafted in the seventh round by Oakland.

While he may not have the football experience as some of this Raiders teammates, Luani makes up for it with some strong instinctive traits he picked up from playing soccer. At six-feet tall, Luani is a tad bigger than most soccer players. Many tend to be smaller of build and closer to the turf. Being taller than most men he’d face on the pitch, the ability to go up for a header is a translatable skill for disrupting the passing game in football.