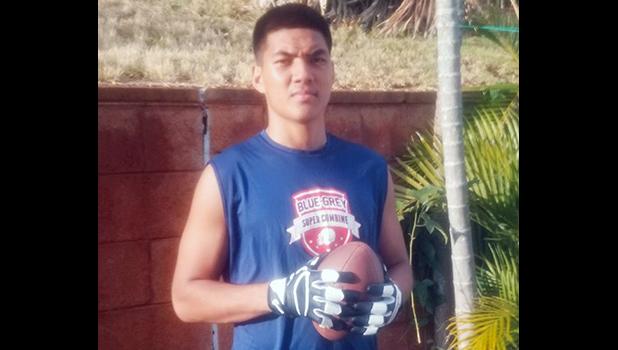 Pago Pago, AMERICAN SAMOA — On Tuesday, 17-year-old Darius McMoore will be on the field at Dallas Cowboys’ AT&T Stadium, playing for the "WEST" during the Blue-Grey All-American Bowl Game set for Tuesday, Jan. 29.

A senior at Samoana High School, Darius plays strong safety for the Sharks and his road to the Blue-Grey All-American Bowl Game was a long - but rewarding one.

Darius first attended the All Poly football camp in Utah last summer where he was one of the standouts.  From there, he was accepted to participate in the Colorado regional Blue-Grey All-American combine, hosted by former NFL players and coaches, where players who would move on to play in the Blue-Grey All-American Bowl Game were chosen.  Darius was selected.

According to Blue-Grey, an estimated 650 college recruiters will be in attendance.  It is said that 90% of the players are offered a chance to play on a college team before - and after - the game.

A school in Missouri has expressed interested in Darius, who is scheduled for an official visit with Colorado State University Pueblo this Friday. Darius should feel at ease, as the defensive coordinator there is a Samoan: Donnell Leomiti.

In preparation for his big day, Darius has been training hard - lifting weights and working on his cardio. He and his family departed the territory this past Sunday, heading to the Lone Star state.

In addition to football, the athletic son of David and Elinor McMoore is also a member of the Samoana HS varsity basketball team.

Playing in the Blue-Grey All-American Bowl Game is a big deal. Kansas City Chiefs superstar quarterback Patrick Mahomes was part of the action in 2014.

"I would encourage all parents to get their kids to these camps. Not just in football, but all sports," said Darius's father David. "Our youth today are very talented. The more they get to the camps, the more exposure they get. Everything is online. You just have to get on it and do your research. There are also a number of athletes who played at all levels in college and higher - who still live here. Reach out to them."

This weekend, Jan. 26-29, Darius and the other participants are being mentored by a staff of NFL veterans. "Rosters will consist of the nation’s premier prospects in the Class of 2019. There will be no shortage of talent," says bluegreyfootball.com which noted that while talks continue with ESPN3, the game will be nationally broadcast via delayed stream on Impact Football Network, likely on Jan. 30 at 5 p.m. (EST)."

"As many know, the country’s talent pool is as deep as ever. Another three All-American Bowls already took place, worth noting, with two in Texas and the other in Florida. That said, the focus now turns toward the upcoming All-American Bowl on Jan. 29. Of course, if the past is any indication the future, the game figures to be one for the record books."