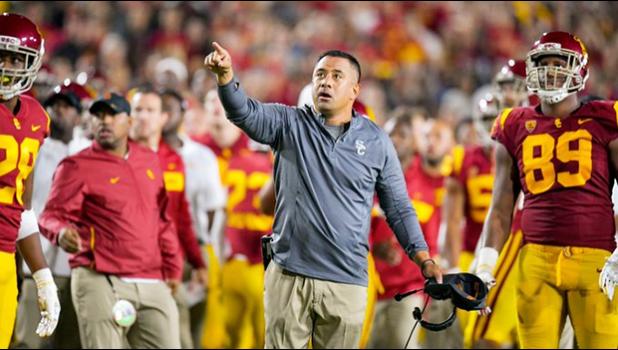 Torrance, CA — Assistant Head Coach and Recruiting Coordinator for the USC Trojans, Johnny Nansen, has been nominated for the Broyles Award, which honors the top assistant coach in college football.

According to THV11.com, "The 53 nominees in this year’s class were selected from approximately 1,500 assistant coaches representing 130 Division One programs across the country. The Broyles Award selection process includes the Football Writers Association of America (FWAA), a college football hall-of-fame selection committee, and current college head coaches."

Furthermore, "A 19-member selection committee of distinguished former head coaches, along with a committee representing the FWAA will select 15 semi-finalists and five finalists from the list of nominees and an overall winner. Those finalists will be invited to travel to Little Rock, Arkansas where the 2018 Broyles Award winner will be announced on Tuesday, December 4th at the Marriott Hotel."

Nansen was born in Apia, Samoa but spent much of his childhood in Laulii, American Samoa. He was raised by his grandparents, Avoki and Paese Mulitauaopele Ah Ching, and left for the US in the early 80s when he was a teen.

His life has always revolved around football - and he's good at what he does.

Last year, hisTrojans won the Rose Bowl - something every college coach wants on their resume. That come-from-behind victory over Penn State (52-49) has been dubbed a 'classic'.

Nansen was a star quarterback for Jordan High School and a three-year (1994-1996) letterman linebacker at Washington State University.

He graduated in 1997 with a bachelor's degree in business administration.

His coaching career has taken him across the country - from Cabrillo High School in Long Beach, CA and Louisville, KY to Montana State and Idaho State.

He eventually returned to the Pacific Northwest and spent five seasons (2009-2013) coaching various positions at the University of Washington.

Afterwards, he found his way back home to sunny Southern California, where he is now coaching the Men of Troy.

Malo lava Johnny. Best of luck to you! #FightOn