‘Road to the Gold” successfully raises funds for training in U.S. and the YOG 2018 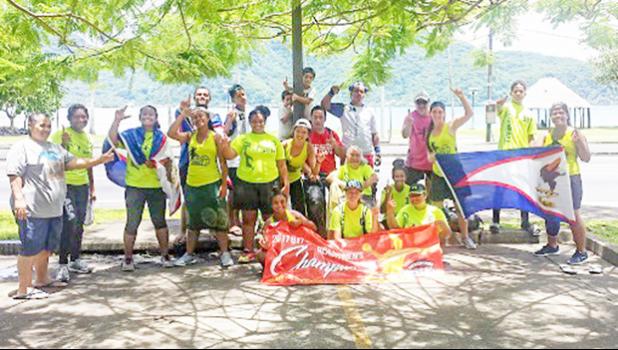 Pago Pago, AMERICAN SAMOA — The Youth Olympic Qualified U18 Woman’s Beach Handball Team — have successfully raised around $31,000 on their ‘Road to the Gold” which is a series of fundraisers held in July, which included radiothons, a concert, a wave, a Beer Fest, and a Go Fund Me page. Assistance was also received from the American Samoa National Olympic Committee.

The Road to the Gold is the name of ASHA Youth Olympic Woman’s Beach Handball Team’s training and competition schedule designed to prepare the team for the October Youth Olympics being held in Argentina. The team was trying to train and compete in Serbia, Los Angeles and Brazil and the total need for this program was $55,000. The team has since cut the Serbia and Brazil training and will focus efforts in the USA.

According to the ASHA president Carl Sagapolutele Floor, the fundraisers collected and deposited a total of $30,951.42.

He said their budget is being used for the team to train and compete at the USA Beach Handball Tour at Huntington Beach California on Aug 25 and 26 . Prior to competing, 7 days of intense training with Team USA will prepare the team before departing to New York for additional cool weather training, intense cardio workouts, team bonding and mental preparations while adjusting to the large time zone differences between Pago Pago, the west coast and Buenos Aires, Argentina.

The budget raised through fundraising is also assisted with the ASNOC - NAP Funding Grant of $4,000 and $3,300 that is a portion of the IOC YOG $10K Team Preparation Grant. The latter funding, according to Floor, means “our girls will be well fed and housed safely with cooks, house maids and female chaperones.” He thanks ASNOC and noted that ANOC Athletes Commission Chairwoman and Sports Medical Trainer Florence Wasko is a part of the team.

The team is expecting to depart NY for the Youth Olympic Games and arrive in Buenos Aires, Argentina on October 2. Their flights to the YOG are funded from this point on by the International Olympic Committee. The team’s first game in on October 8. The draw hasn’t been done yet.

“Our team will train hard and compete even harder as we are honored to represent our families, our villages, our churches, our schools, our people, our government and our territory — Fa’afetai Tele lava,” Floor said. “We depart on Tuesday. Please come by and cheer us off as we depart with all of you in our hearts.”