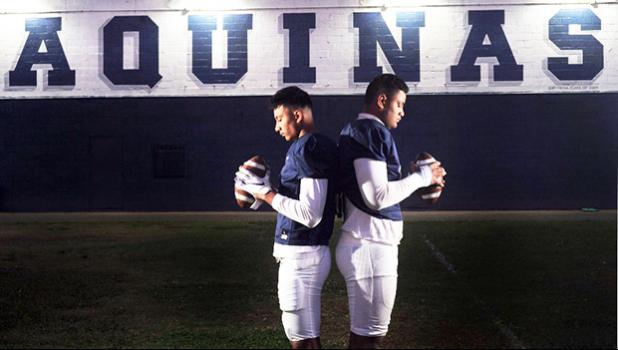 “They have a lot of good experience and have not been shell-shocked playing varsity football,” Brusig said. “Francisco had an 80-yard touchdown in his first game, against Ontario Christian, and Francis has been a force on the defense line. He had a scoop and score against Ontario. He still has a lot to learn but he’s very physical and coachable.”

Francisco has thrown for more than 1,000 yards and rushed for more than 500 in eight games (he had to sit out five games due to transfer rules). Francis is already such a force on the line that some think he can follow in the footsteps of his brother Fred Mauigoa, the starting center for Washington State.

The Mauigoa brothers are two of six players on the 37-team roster from off the mainland to have found their way to Aquinas, which has a history of welcoming foreign and non-mainland students, both athletes and non-athletes.

The other non-mainlanders are senior receiver Terence Fall from France, who is committed to Brigham Young University; sophomore two-way lineman Junior Taase Faumui (6-4, 350) from Australia; and senior defensive linemen Sione Lolohea (6-3, 235) and Tapena Tuitupou (5-9, 215) from Hawaii.

The Mauigoa boys have enjoyed playing for the Falcons and look forward to completing their playing careers at Aquinas.

Read more about the Mauigoa brothers at Press Enterprise