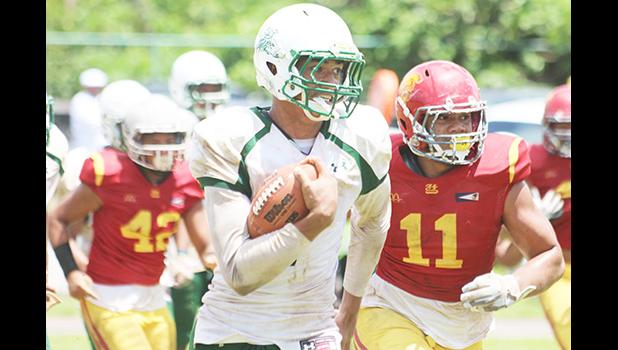 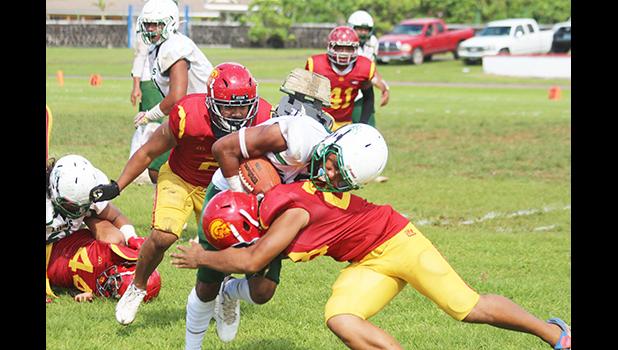 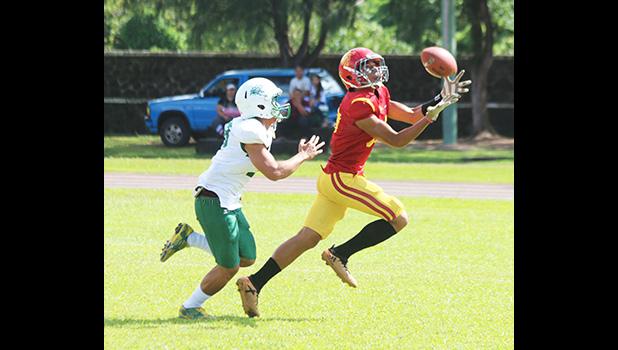 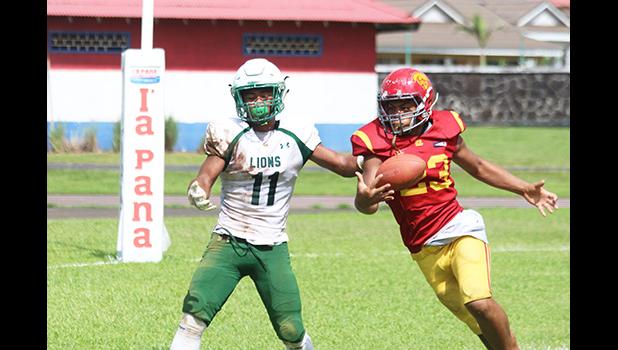 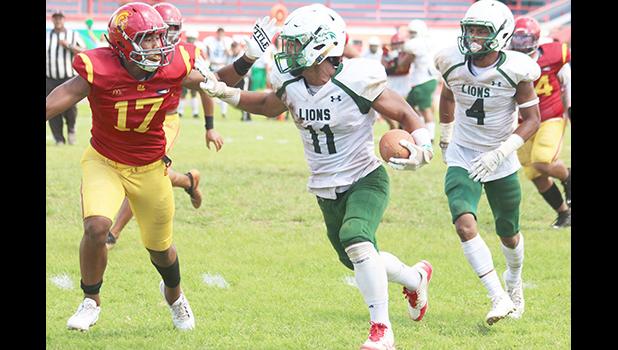 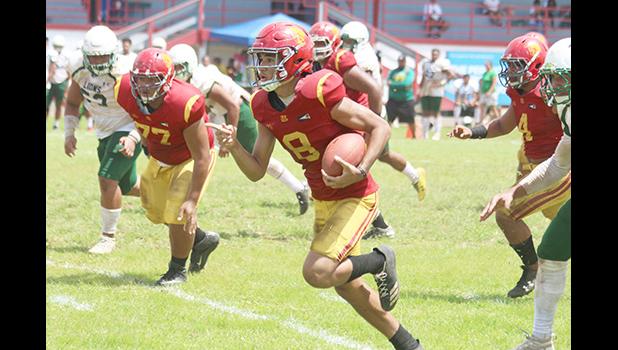 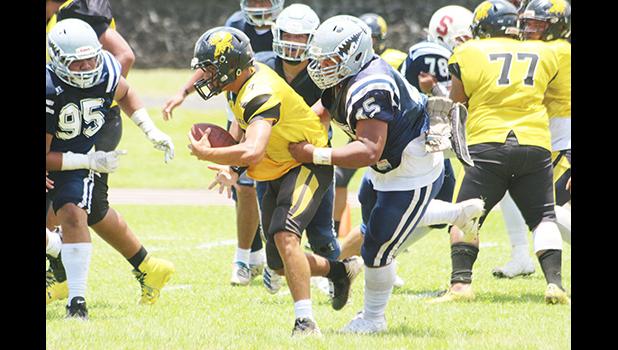 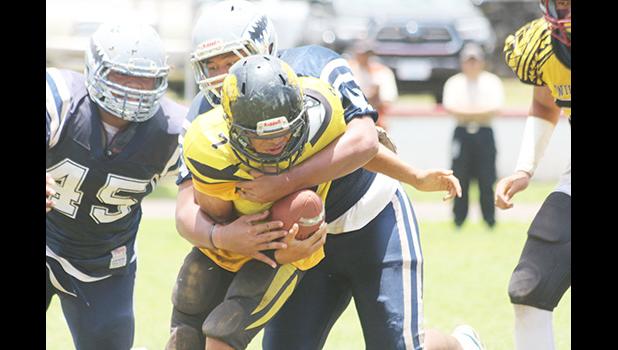 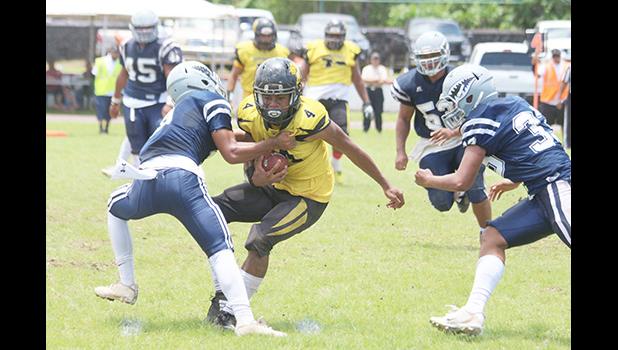 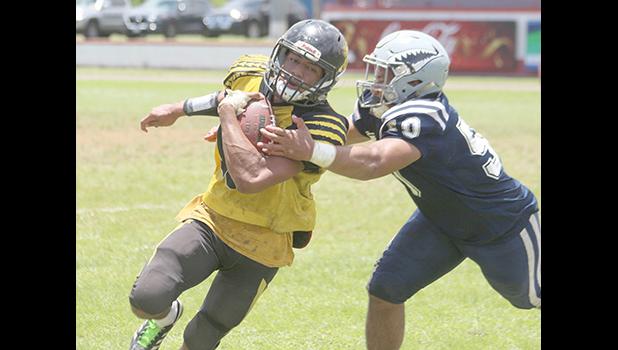 Samoana Sharks barely escape the claws of the Wildcats in their 6-point victory
By
Tony Gasu
tony@samoanews.com

Pago Pago, AMERICAN SAMOA — The 2019-2020 American Samoa High School Athletic Association (ASHSAA) finally closed off its regular season this past Saturday morning at the Veterans Memorial Stadium, with a shocking win by the Leone Lions, who closed off their season on a high-note, after defeating the Tafuna Warriors in a heart stopping match that went down to the wire, collecting their third win of the season against the Warrior Nation.

The Samoana Sharks were in awe when they fielded against a totally different Nu’uuli Wildcats defense this past Saturday, as their famous ‘Air Attack’ was defended well by Head Coach Andrew Bill Ena and his Nu’uuli Wildcats in their final game of the regular season. However, despite a great performance by Nu’uuli it still wasn’t enough to get pass Tillus Sala and his vicious Samoana defensive linemen who had a field day chasing Nathaniel Maea all over the backfield in their 26- 20 victory.

After that win against Nu’uuli last Saturday, Head Coach Pati Pati and his Blue Empire will now prepare to face the Tafuna Warriors in Saturday’s Play-off game, to determine who will face the No.1 Faga’itua Vikings in this year’s ASHSAA 2019- 20 Championship Game.

It was a scoreless first quarter for these two powerhouse teams from the West, as both Leone and Tafuna had a strong defensive showdown to open things up early in the ball game.

Scoring began in the second quarter with the Warriors getting the ball rolling, after a good special team’s play from Tafuna when a punting situation for the Lions went sour in their own territory — Tafuna recovered the bad snap at the 25-yard line.

From there, it was a one play touchdown when Oakland Salave’a dropped back to charge a precise pass to the numbers of Tuinauvai Moli who hauled in the catch inside the end zone for the first touchdown of the game with just 4:21 remaining in the second quarter of the match.Their field goal conversion by (#35) a JV player was good enough to put the Warriors in front with a 7-point lead.

The Lions who had a shot to score before halftime were disappointed when the Warriors ‘No Fly Zone’ defensive backfield shut down their passing game late in the first half. Leone at the 7- yard line with a second and goal reception trying to score before halftime – Fa’alili Fa’amoe rolled out to fire a bullet pass to the middle intended for Pearson Livi, it was intercepted and picked off by Ieremia Ieremia at the 1-yard line closing off the first half of play.

Midway into the second half of the match, Leone was slapped with a 15-yard personal foul penalty that gave way to Tafuna’s second score of the match – with Salave’a who was scrambling all over the backfield looking for an open receiver, decided to take it himself out to the sidelines and down to the end zone to score Tafuna’s second touchdown of the game.

Warriors were leading 14- 0 after their field goal conversion, while the Lions were still trying to gather momentum after their Head Coach Jerome Fiatoa was ejected from the game.

It was a late bloom for the Lions but it was better late then never – With just 1:55 remaining in the third quarter, the Lions finally started to get things going, with a second down reception for Fa’amoe and his offense from the 15-yard line, and Fa’amoe sent Joshua Ta’ani out to the sidelines with a pitch play that Ta’ani turned upfield for six, to score Leone’s first touchdown of the game.

The Lions, now fired up, decided to go for another one when they stuck with the ground game with Freshman running back Wylan Faga and Taani leading the pack downfield, Leone spotted themselves a threatening first down at the 1-yard line. From there, Fa’amoe muscled his way through Tafuna’s defensive front to score Leone’s second touchdown of the game with just 9:27 remaining in the ball game.

Their two point attempt was a quick seam route pass from Fa’amoe to Elijah Elisara — good enough to tie up the ball game at 14 a piece.

Tafuna’s offense led by Salave’a replies with three huge carries by Salave’a on quarterback keepers to move the chains downfield, and Tafuna was already looking at a first down from the 19-yard line after Leone was penalized with another personal foul. From there, Salave’a, who couldn’t find an open receiver, decided to tuck and run with it to score a touchdown as the Warriors took back the lead 20- 14.

But it’s late in the ball game with just 46 seconds remaining on the clock, and Leone decides to give it their all to close off their season – It’s Fa’amoe literally carrying the offense on his back with some huge carries down to the 1-yard line that brings the win home for the Lions.

At the 1-yard line, Fa’amoe decides to give it one final push when he tucks and runs with the ball straight up the middle, to score Leone’s third touchdown of the game to tie things up again, this time 20- 20.

Their two-point conversion is a fake inside hand off to Faga, while Fa’amoe sends Taani out to the sidelines with the jet sweep to score the leading two points of the game, as the Lions sealed the deal and closed this one off with a 22 - 20 victory, their biggest victory of the season, beating Tafuna in their Senior Game.

Samoana Sharks sealed the deal in their Senior Game, but they barely escaped the wrath of the Nu’uuli Wildcats in their final game of the regular season. Both teams opened things up with the ground game to test the waters, but the ground game was of no use for the Sharks as AJ Masunu, Charlie Toa Leama and the Wildcats defense came ready to contain Samoana’s running attack.

It didn’t take long for Samoana to notice that their running game wasn’t working, so they changed it up with just 6:21 remaining in the first quarter of play, and Samoana’s second down from midfield had quarterback Viliamu Tanielu sitting in the pocket charging up the long pass that was hauled in by Malaetasi Amisone en route to the end zone to score the first six points of the game.

Late in the first half, with just 32 seconds remaining in the second quarter, and Nu’uuli finally convert for six after being denied of the end zone three times in a row inside the red zone, Nathaniel Maea and his offense finally convert after a quick slant pass from Maea to Calloway ‘Cali’ Alosio to score a 5-yard touchdown reception for Nu’uuli to tie up the ball game at 6 a piece going into halftime.

Their two-point conversion quick out route pass to Isileli was intercepted by Daniel McMoore denying Nu’uuli an extra point.

Nu’uuli who opened up the third quarter with missed opportunities and mistakes that cost them another six points, was disappointed when a fourth and long punting situation that was suppose to get them out of trouble, didn’t go as expected when the snap to the punter went over his head, as he battled to chase it down – Samoana defenders swarmed the backfield and recovered the live ball at the 10-yard line.

From there, Tanielu came on the field and took advantage of the opportunity on hand, when Tanielu ran that one into the end zone for their second touchdown of the game. Their two- point conversion was a trick play – reverse wide receiver pass from Avory Seumanutafa to Amisone to secure the Sharks 14 - 6 lead into the final quarter of play.

It didn’t take long for the Sharks to get back on the board after Samoana’s Offensive Coordinator Keith Leuta worked his magic to have Tanielu and his offense score their third touchdown of the game as they extended their lead 20- 6 to open up the final quarter of the match.

With just 5:12 remaining in the ball game, Nu’uuli Wildcats Offensive Coordinator William Lobendahn engineered the perfect play for his offense to score their second touchdown of the game which brought the Wildcats back to life with a 20- 12 score.

Both teams scored a touchdown to close this one off in their final game of the season 26 - 20.