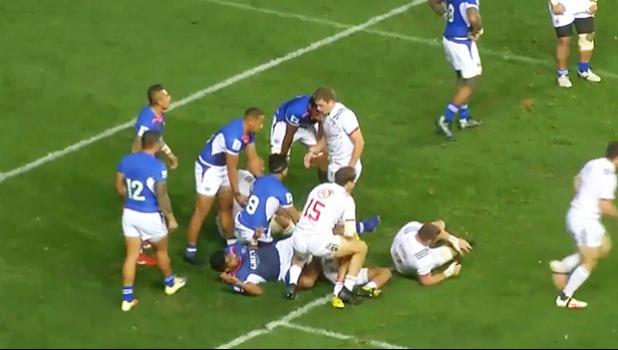 San Sebastian, SPAIN — Manu Samoa lost their first game of the November tour, falling 30-29 to the USA Eagles at the Anoeta Stadium in San Sebastian, Spain.

The game ended on a successful penalty kick for USA, giving them their first win over the Manu in six attempts.

After a spirited siva tau for the first game of the Steve Jackson era, the start of the game was delayed for several minutes.

When experienced No. 8 Faifili Levave knocked the ball on right from kickoff, it looked as though the break may have lulled Samoa to sleep.

That seemed the case for the first 20 minutes or so, with USA ramping up their dominance over the game.

The Eagles owned the collisions, with hooker Joe Taufete’e crashing over in the 12th minute for a classic forwards’ try after an attacking lineout.

Manu Coach Steve Jackson had identified the direct play of the USA loosies as a threat before the game, and their work at the breakdown was impressive.

The USA pressure caused Manu Samoa to concede a penalty for offside, which first five Will Hooley slotted through the posts.

It got worse for the Manu immediately.

They couldn’t secure the kickoff, and Eagles flanker Hanco Germishuys streaked away for a try that saw the scoreboard reflect their dominance, 15-0.

If Samoa needed inspiration, they got it from fullback Ahsee Tuala.

The Northampton Saints man broke several tackles with a powerful burst after inserting himself into the line.

Manu Samoa exploded into life, with prop Logovi’I Mulipola finishing some great buildup with a close range try in the 26th minute.

The confidence begin to flow, and with it came some great attacking rugby.

Tuala broke the Eagles line again, setting up another try for winger Ed Fidow just five minutes after the first.

The momentum had totally flipped, and halfback Melani Matavao sped away then dotted down to make the score 15-21 after 35 minutes.

He would gift one straight back at the ensuing kickoff though, throwing a speculative pass that Cam Dolan intercepted and ran in for a try against the run of play.