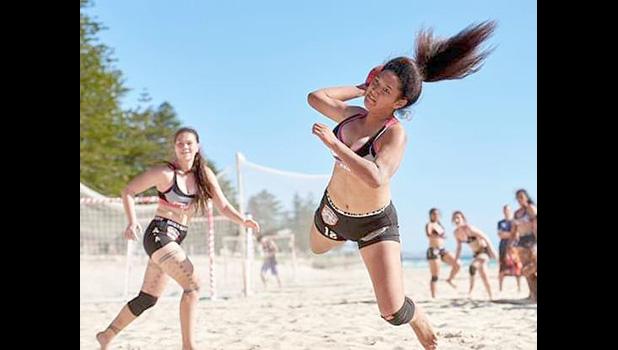 Unlike the Oceania Championships in which players must hold a passport from the country or territory they represent, the Australian Open is played by clubs, whose members may span the globe.

“Hannah was very instrumental is helping our girls secure the silver medal. She played the pivot position, similar to a power forward in basketball, playing what can be considered the low post” said Assistant Coach Joey Sagapolu

Hannah’s knowledge of handball tactics provided a first-hand look for our girls to emulate after each game. The experience provided the women with a better understanding of the pivot position, which was noticeably improved during the remaining games including the Oceania Championships in which the women also placed second among five Oceania teams — losing to only Australia’s National Team.

“We met Hannah last year and she was very friendly. Our girls liked her immediately and they formed a bond. I had one remaining spot on this year’s team and thought this to be a great opportunity to have our girls learn by playing with an experienced player, while at the same time being able to rest some of our girls.” said ASHA Head Coach CJ Sagapolutele Floor.

“The schedule was grueling with up to four games daily, along with refereeing duties which I knew from last year. Our focus was on learning throughout the Australian Open while we wanted gold in Oceania. Taking silver in both competitions is an amazing feat for our young team and I am so proud of them” he added.

What makes Hannah’s participation even more interesting — aside from her handball experience and being an Australian national player — is that Hannah is a transgender athlete, or as we say, 'a fa’afafine'.

“I don’t play beach handball often; so for me, I just wanted to have a good time and in doing so, help pass on whatever knowledge I could from the Indoor game” said Hannah, who has represented Australia since 2012.

“The girls representing American Samoa work really hard in practice and you can see that right away. So I just tried to help them with things you really only pick up by being older and having played a lot, like I have. Things like when to increase or decrease the tempo of the game, how to position your body — all those little things that make a big difference.”

As per International Olympic Committee (IOC) rules, when someone is transgender, or fa’afafine, to compete with women, you need to show that your testosterone is under a certain limit for 12 months prior to competing, and stays there for the length of their career. To comply and validate her testosterone levels, Hannah must submit monthly blood samples to the International Handball Federation (IHF).

“I have no testosterone, it’s undetectable in my system. So this, along with the other hormone treatments that I go through anyway, is to ensure fair competition, which I support.” explained Hannah,

When asked what it’s like competing as a fa’afafime, she said, “It can be hard at times because unlike Samoa and American Samoa, being fa’afafine in many countries isn’t very common and therefore we are accepted in some places and not in others.”

She added, “Sports is great, it’s the most welcoming environment I’ve ever been involved in, people only care about what you’re like as a teammate and if you’re a good person, nothing else matters."

ASHA is planning to bring Hannah to American Samoa to assist with the preparation of two women’s indoor handball teams, (youth and junior) as they are scheduled to compete in the 2019 IHF Oceania Continental Trophy in New Caledonia this August.

“In addition to assisting with training the women’s teams, I am hoping to open doors for our fa’afafine athletes who we hope find an interest in learning and playing handball” explained Floor. “Understanding the guidelines and process for testosterone reduction and IOC compliance is an option for our people, who would like an opportunity to represent American Samoa at the elite level of international competition that I’ve never realized until I met Hannah.” he added

Hannah closed her interview by saying, “Anyone wanting to play handball should just do it. As you can see, I’m playing for Australia in indoor, so it’s possible to get to the highest levels if you want and are good enough.  I just played with ASA, and everyone involved was so welcoming.”

The American Samoa Women’s Club Team, known as Night Hawks, lost their first Australian Club Championship game in a 2-1 overtime shoot-out to the Beach Melba’s before knocking off Team Second Wave 2-0. The women then beat the Jellyfish 2-0 to place second in their pool.

In the cross over round, the ASA Women defeated the Parrot Shawtys 2- 0, ensuring a spot in the Final Four.

The girls then faced the Beach Melba’s again, this time, winning both periods in a tough battle 2-0 to secure their placement in the finals.

The team is coached by CJ Sagapolutele Floor and Joey Sagapolu.