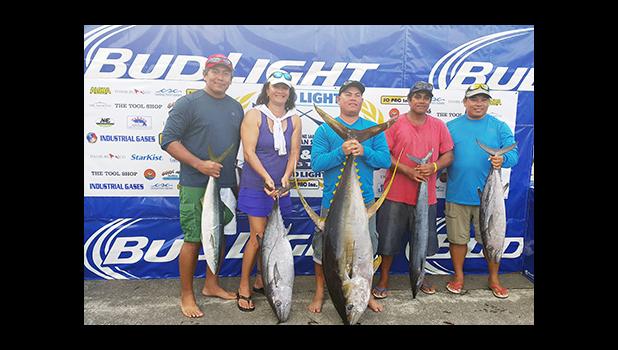 The event was a collaboration of the sanctuary, local fishing community and private sector, with major sponsors Bud Light and South Pacific Distributors Inc. (SOPAC).

The sanctuary was also very fortunate to garner support from the Sanctuary Advisory Council members and the community who assisted in organizing and sponsoring this exciting fishing tournament that will become an annual event.

Over 100 fishermen with their families and friends joined the last day of the event for the awards ceremony. Further, organizers and participants of the tournament donated over 400 pounds of fish caught to the Hope House- Fatu o Aiga.

There were 17 boats registered for the tournament that included both local alias and recreational fishing vessels. This was the first time both groups joined together for a fishing tournament.

Although not limited to sanctuary waters, a major goal of the tournament was to better inform the fishing community that you are allowed to fish in Sanctuary areas with the exception of Fagatele Bay.

Fagatele Bay is the only sanctuary management area where fishing is not allowed. Another goal of the event was to promote recreation in the sanctuary.

Tournament organizers received a lot of great feedback from the boat captains and participants, as they were grateful for the opportunity to fellowship and to learn more about the sanctuary mission. This feedback will help in the planning of the 2017 tournament and ensure it is even more of a success.

Cash prizes provided by SOPAC and Cardinal Point Captains were presented to tournament winners in the following categories:

Fa’afetai tele, and we look forward to your continued support and participation again at next year’s tournament!