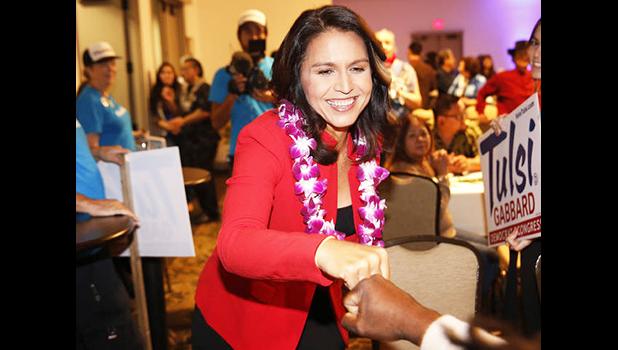 Honolulu, HAWAII — Congresswoman Tulsi Gabbard was born a U.S. citizen and served two tours of duty in the Middle East as a member of the Army National Guard. She’s served in elective office — as a member of the Hawaii Legislature, Honolulu City Council and U.S. House of Representatives — for a combined 10 years.

So it might seem odd that her eligibility to run for president of the United States, something she’s giving serious thought to, would ever be called into question. But being born in American Samoa, where Gabbard lived until the age of 2, elicits unsettled constitutional questions about what it means to be a “natural-born citizen,” a requirement for the presidency, according to legal scholars.

And while a broad consensus holds that Gabbard is indeed eligible to run, that gray area within constitutional law could become a political issue for the Hawaii representative if she does seek the national political spotlight.

The issue surfaced for former Michigan Gov. George Romney, who was born in Mexico, when he ran for president in 1968. It became an issue for late Arizona Sen. John McCain, who was born in the Panama Canal Zone where his father was stationed as a Navy officer.

Most recently, it was a point of contention for Texas Sen. Ted Cruz, who was born in Canada and engaged in a bitter fight with President Donald Trump during the 2016 Republican presidential primary. Trump repeatedly threatened to sue Cruz over the question of his eligibility, an issue that became moot once Trump won the nomination.

Trump took the issue further than most, by fanning the baseless conspiracy theory about Hawaii-born President Barack Obama being born in Kenya, helping coin the term “birther” in reference to those who question candidates’ eligibility based on their birthplace.

The Obama case aside, legal scholars say there are various legal complexities involved when someone born outside the 50 states runs for president.

“I think that people might raise it for political reasons, but it is also a puzzle that’s attractive for legal scholars because there is this defect in the Constitution,” said Gabriel Chin, a professor at the University of California at Davis School of Law and expert in constitutional law.

Chin noted that Congress could fix the problem by amending the Constitution to get rid of the natural-born citizen clause, or clarifying its meaning, but it hasn’t, and the courts have not opined on it.

“Lawyers like court decisions to say. ‘OK, it is definitely this or definitely not this,’ and we don’t have one and are not likely to get one,” said Chin. “So the controversy is probably going to continue to percolate.”