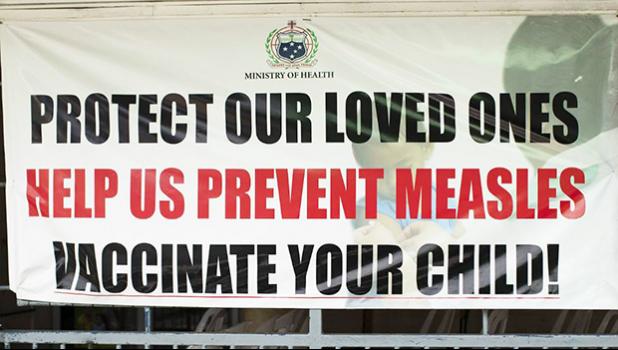 Apia, SAMOA — As the death toll due to measles rises to 55 the Samoan Government has announced further measures to combat the disease.

On Tuesday evening (Samoa time) the Government announced a complete shutdown of the private sector.

The move comes a day after the Samoan Prime Minister announced the closure of the public sector over two days.

Both will be shut down on Thursday and Friday to allow mass vaccinations of all Samoan people.

Cabinet Ministers were in Savai’i for site visits of clinics and met upon arrival at 5pm to form a Cabinet meeting to approve the new amendments.

During the closure period no vehicle will be permitted on the road unless it is a vehicle belonging to an exempt service from the public sector or a vehicle being used to seek medical assistance from a medical facility.

According to the order by Deputy Council Member, Le Mamea Lemalu Su’a Tuiletufuga Leatuavao Ropati Mualia, all private and public offices, services and businesses and operations usually open to the public in Samoa will be closed from 6am to 6pm on Thursday 5th and Friday 6th December, 2019.

“Inter-island travel between Upolu and Savai’i [is] prohibited unless travel is for the purpose of seeking medical assistance  from a medical facility or travelling overseas; all members of the public are to remain at their places of residence to await the vaccinations units being mobilized for the M.M.R. vaccinations plan,” says the order.

For the private sector services, exempted are hotel and hospitality services; communication services and morgues.

Tuilaepa said that immunization will become mandatory under the law for all ages. The Government had earlier announced previous age restrictions on vaccines would be lifted and they would now be available to anyone under 60.