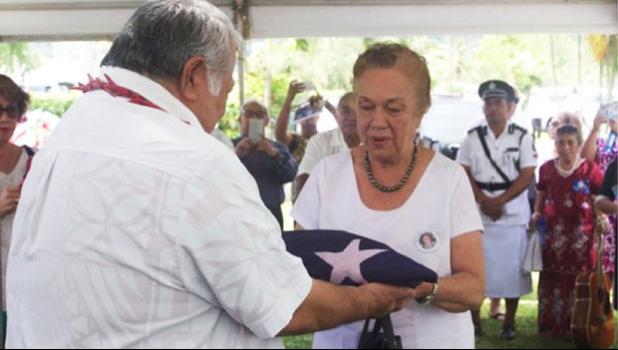 Pago Pago, AMERICAN SAMOA — The life of Hans Joachim ‘Joe’ Keil was celebrated and honored in a state funeral held yesterday for the former statesman, who was also a well-known philanthropist and prominent business man.

They were joined by former Head of State, His Highness Tui Atua Tupua Tamasese Efi and his Masiofo, Her Highness Filifilia Tamasese, Members of the Council of Deputies, Cabinet Ministers, Members of Parliament, members of the business community and many more whose lives were touched by the late businessman’s generosity.

Described by his wife, Celine Keil, as a complicated man who was both loving and loyal to his friends and family, Mr. Keil manifested many of those complexities into a very diverse and ambitious career.

He was a military man, a pilot, a politician and a commercial broadcaster.

However, the most revered position he held in the eyes of the community and loved ones was his high aptitude in the role of family man.

His Highness Tui Atua described Joe as ‘a truly beautiful human being’ and if one wanted to identify what defined Joe as a husband, father, son and brother, it could be embodied in the relationship that he had with his son, Nathan who by all accounts was his best friend and side kick.

Wife Celine also attested to the famous, unique bond that existed between her husband and their only son, who was born with Down syndrome, but became the joy of their family – being the child that brought out the softer side of a tough, very driven and focused businessman.

She also spoke of how Joe was proud to raise very loving, intelligent and independent thinking women in his three daughters Violette, Bella and Katrina, and joked that perhaps the ‘independent thinking’ part sometimes worked against him but none-the-less he was a hero to his daughters.

Mr. Keil’s generosity of spirit was perhaps what he was most well known for and he was not one to boast, according to his daughters.