Pacific fisheries observers could return in 2023 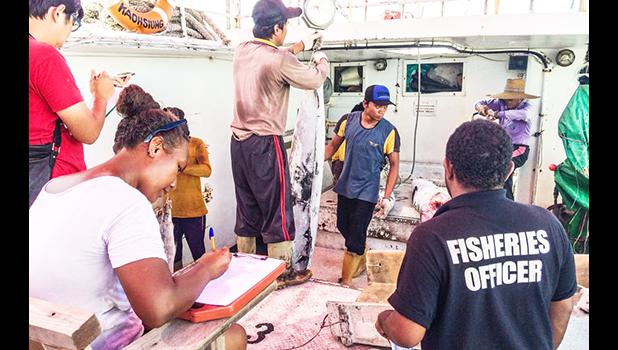 Kolonia, POHNPEI — Commercial fishing vessels in the Pacific could see regional fisheries observers returning to their decks as early as January next year.

Prior to the pandemic there were around 800 regional fisheries observers on board vessels in the region.

These independent witnesses spent weeks — months — collecting objective data relating to the volume and type of fish, what methods were used to catch fish, and any observed breaches of fishing rules.

But in April 2020, with borders all over the world closing to slow the spread of COVID-19, a consensus was reached at the Western and Central Pacific Fisheries Commission — also known as the Pacific Tuna Commission - to suspend the regional observer program.

There are concerns the three-year-absence of these observers from commercial fishing vessels has been detrimental to the regulation of the world's largest tuna fishery.

This is because of the crucial role observers play in ensuring conservation rules protecting fish, turtles, birds, and other marine life are adhered to.

The director general of the Pacific Islands Forum Fisheries Agency, Manumatavai Tupou-Roosen, said looking at how to safely redeploy observers from the first of January is one of many fisheries management measures to be discussed at the annual meeting of the Pacific Tuna Commission which gets underway in Vietnam on Sunday.

"First physical meeting in three years. And there's just so much excitement about coming together in person after such a long time," Dr Tupou-Roosen said.

The Commission is one of five Regional Fisheries Management Organisations that specialise in tuna.

"This is the largest tuna fishery in the world, around 30% of global tuna supplies come from our members waters.

"And it's the healthiest tuna fishery in the world. It's the only region where all four major tuna stocks are biologically healthy," Dr Tupou-Roosen said.

"When it comes to some of our more complex issues…we've had to hold them over until we could discuss it more robustly in person, but we will recognize that we've all been able to track significant work during the COVID period," Dr Tupou-Roosen said.

She said some key areas that her organisation's Pacific member countries are keen to focus on include;

- Better and safer working conditions for crew onboard commercial fishing vessels in the region.

- Exploring new tools that could be used to help improve regulatory work in the fishery.

- Investing in technology for longterm sustainability.

WHY IS TUNA SO VALUABLE TO THE PACIFIC?

"[Tuna] it's important for food security, it's important for employment opportunities. And also, so many of our governments depend on it for a source of revenue that can help with development such as much needed infrastructure, schools, hospitals, roads.

Dr Tupou-Roosen says they will also be reflecting on lessons learned from working through the pandemic and considering the potential impacts of the climate crisis on the fishery.

The 19th Regular Session of the Commission in Da Nang will be a hybrid — in person and online — meeting. It runs from 27 November to 3 December.

WHO IS WHO IN THE PACIFIC TUN COMMISSION?