Outrage in Tonga over apparent ban on girls playing rugby 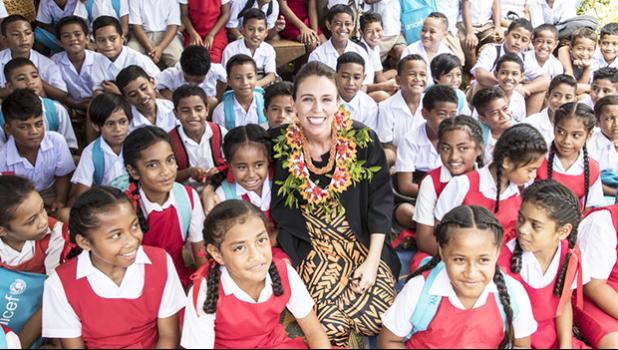 There has been outrage among Tongans over an official letter purporting to ban girls at the country's state school from playing rugby and boxing.

The letter from the Ministry of Education informed staff at Tonga High School that the girls shouldn't be playing such sports because it goes against young women's dignity and Tongan culture and traditions.

Women's rights advocate 'Ofa Guttenbeil-Likiliki was one of those outraged at the letter.

She said the thinking behind it was archaic.

"It takes us right back to the thinking that education is only academic and for girls to remain in that kind of academic lane, sports is just the alternative for boys.

"It is really just taking us back from all the work we have done so far in trying to achieve and bring forward gender equality in Tonga."

Ms Guttenbeil-Likiliki said culture was being used as an excuse and history is full of strong, brave Tongan women, including female athletes who have been inspirational in recent times, like New Zealand's Teuila Fotu-Moala.

"Teuila, who got the female player of the tournament for the women's rugby league world cup, that story hit Tonga last year and made a lot of people proud.

"To see these women excelling in sport, I mean, you look at Valerie Adams. This letter from the Ministry of Education has taken us a hundred years backwards."

Ms Tuivai said the move would mean some girls miss out on the opportunities that rugby and other sports could provide.

"It's just closing doors, closing all opportunities for women especially leading up to the Pacific Games and Olympics, as we have set our path to work towards the 2020 Olympics and here in Tonga, women's rugby has a bigger chance to reach those international competitions than men."

Hoko Tuivai said sport could also be a unifying factor as illustrated by last year's feats by the national rugby league team which triggered parades and street parties across the country.

Dame Valerie Adams is a a two-time Olympic champion and four time World champion in shot put, who competed for New Zealand but is half Tongan.

In response to the letter she posted on Facebook that "Tongan women must be free to choose their destiny, and not be held back by misguided and stubborn misinterpretation".

However, acting CEO of the Ministry of Education Manu 'Akau'ola said concerns about the impact of the recent devastating Cyclone Gita were behind the letter.

"Our minister had directed that all government schools, because of the cyclone, [that] they are not going to be involved in any sports during this term because we have already lost enough school time - class time.

"So his direction is not because we're not supportive of the sporting events, it's just make up the lost time we've lost because of the cyclone."

Manu 'Akau'ola said he will be checking higher up to see if the letter's instructions were really what the education minister intended.

The New Zealand Prime Minister, Jacinda Ardern, has joined the chorus of criticism over the Tongan Government's apparent ban on girls playing rugby or boxing.

Ms Ardern says New Zealand's aid support for sports in Tonga would not be threatened but she disagrees with the directive.

"As a school student I played touch rugby and I would encourage all the young women to engage in whatever sporting code they are interested in." said Jacinda Adern.

"We do provide funding via MFAT to Tonga to encourage children's participation in sports. And so a young woman will still be able to do that I understand through their villages, even if this dictate is made by these schools."

PRISONER STILL ON RUN IN SAMOA AFTER OVER TWO MONTHS

An escaped prisoner in Samoa who has been on the run since December is continuing to give police the slip.

Uili Manuleleua was one of four incarcerated at Tafa'igata Prison who broke out just a few days before Christmas last year.

Two were recaptured just a few hours later and a third a few weeks later.

Prime Minister Tuilaepa Sailele Malielegaoi said a few weeks ago that Police were "tracing the prisoner".

Samoa police spokesman Auapa'au Logoitino Filipo said the one eyed prisoner has been convicted of theft and breaking and entering.

March 15-16, the World Health Organization brought together Pacific government leaders, climate change champions and technical experts to develop the Pacific Action Plan for the WHO Special Initiative on Climate Change and Health in Small Island Developing State, which will cover 22 Pacific Island countries and areas.

Pacific island communities are very vulnerable to extreme weather events, such as rising sea levels, droughts, floods and extreme cyclones - all of which are increasing in severity and frequency because of the effects of climate change. Rising sea levels and increasingly extreme weather events are not only destroying homes, medical facilities and other essential services, but also

Opening this event was WHO’s first Assistant Director-General (ADG) for Climate and other Determinants of Health, Dr Joy St John. “As a citizen of Barbados, another Small Island Developing State, I understand how climate change is having such extreme impacts on our countries,” said Dr St John. “This is why I am so passionate about this Initiative and I am committed to pushing for practical solutions and action to address the health impacts of climate change.”

Representing the importance of this initiative, and the impacts of climate change on health, the event was also attended by the Fiji’s Minister of Health and Medical Services, Rosy Sofia Akbar; the Cook Island’s Honourable Minister of Health, Justice and Parliamentary Services, Nandi Tuaine Glassie; and Dr Corinne Capuano, WHO Director of Pacific Technical Support and Representative for the South Pacific.

Over two days, 35 participants from 18 Pacific island countries and areas, and 25 technical climate change experts and stakeholders from across the world have come together in Nadi, Fiji, to identify key priorities and set the agenda for how best to address the health impacts of climate change in the Pacific.

Participants will also be agreeing upon a timeline and discussing how resources can be best used for the initiative’s implementation.

In a sign indicative of the Northern Marianas' growing drug problem, four policemen were hospitalised on Thursday after reportedly inhaling methamphetamine fumes.

The police officers became dizzy after opening a black backpack hastily left in the tourism district of Saipan by an alleged offender they were chasing.

Upon inspecting the contents of the bag, the policemen were greeted with the nauseous smell of what later turned out to be chemicals used in making crystal methamphetamine or "ice."

Medics of the Department of Emergency Medical Services brought the four officers to the Commonwealth Health Center where they were treated and later released.

Police eventually arrested the suspect who threw the backpack during the foot chase.

The Department of Public Safety said they will charge 39-year-old in a federal court for attempting to manufacture a controlled substance.

The Samoa Media Council has issued a statement to engage with members of the public and raise awareness about some of its initiatives.

“It is also timely in that as of late, the Samoa Media Council have been increasingly fielding concerns from our citizens around social media, the concept of cyber bullying and defamation of character and reputations,” the statement reads.

“The Media Council Act 2015 and the Code of Practice are quite comprehensive in terms of handing complaints, self-regulation and professional integrity as a cornerstone of a journalist’s credibility.

It further states: “This Code of Practice is our practitioners’ safety net from any criminal or civil proceeding or the subject of a complaint before the Council and is the reassurance looking forward to grow in the profession.

“Underpinning all of this is also our recognition of the fundamental importance of freedom of expression. Alongside this is a clear public interest in ensuring those who are significantly harmed by unlawful communication have access to meaningful remedies.

“This Code of Practice was 20 years in the making so not an overnight effort but rather has some very strong grounding, expertise and best practice that sits behind it to inform the final product.

These Core Principals are primarily:

1. Be accurate, do not mislead

2. Report fairly and with respect for others

3. Understand the laws as it affects journalism

4. Establish and administer an in-house process for complaints handling

5. Uphold high ethical standards of personal conduct as a journalist

7. Protect the welfare of children

8. Take care when reporting suicide, violence and other sensitive matters

9. Election reporting should be impartial and balanced

“We are also very mindful that we need to appreciate the local context, and that the complaints process needs to meet the needs of all citizens, many whose first language is Samoan.

“As context and society changes, the harms that our people can be subjected too also change, especially with new technologies which can have effects that can be highly intrusive on one’s privacy. One of the Councils main concerns is protecting our citizens from substantial harm. It is these citizens which we wish to focus our activities on, citizens with legitimate complaints, thinking they have nowhere to go but the police and justice system.

“We need our complaints system to work better for them so as to get some redress for their harms.”

For 2018, the Council hopes to establish increased awareness of the complaints process in a way that is easily understood and to continue to promote the Code of Practice and to secure some funding so that they can have a dedicated focal point to handle enquiries and the complaints process.

“We will have monthly meetings which may on occasion involve expert guest speakers or a workshop type meeting.  We will also be translating into Samoan as part of reaching our communities these processes and procedures.

“We look forward to ongoing support as we grow as a Media Council and a Council that can be respected for assisting our citizens who require redress when not wanting to revert to the Justice system for remedies for harm caused by false publications,” the statement said.