Ombudsman: “Fa’a Samoa does not permit husbands to beat their wives” 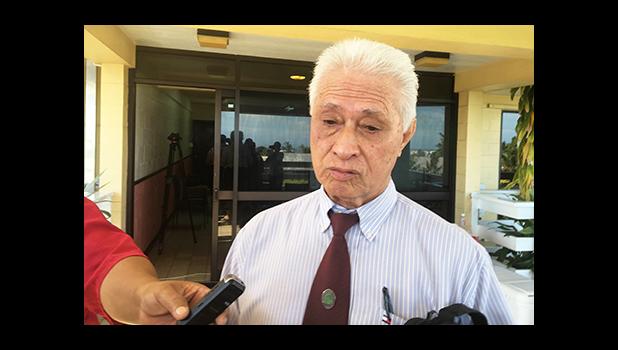 Apia, SAMOA — Samoa’s Ombudsman Maiava Iulai Toma has made it clear that the “Fa’asamoa does not permit husbands to beat their wives.”  He made these comments during his presentation before the media on human rights.

Maiava heads the Office of the Ombudsman that was created in 1988 and in 2013 and mandated to be Samoa’s National Human Rights Institution which is to protect and promote human rights in Samoa.

During his presentation, Maiava posed the question, “How are the rights of women protected at the international level?” He said human rights define the value and worth of each person and their relationship to society. They identify standards regarding the quality of life that each of us can expect to enjoy.

He said that equality of rights for women is a basic principle of the United Nations.

“The Preamble to the Charter of the United Nations sets as one of the Organization's central goals the reaffirmation of ‘faith in fundamental human rights, in the dignity and worth of the human person, in the equal rights of men and women’.”

He went on to outline the UN charter and its international mandate to strive towards the full realization of all human rights and fundamental freedoms to all people regardless of gender. Maiava said the status of human rights, including the goal of equality between women and men, is elevated, and, the protection and the promotion of Human rights become a contractual obligation of all Governments and of the UN.

Many human rights have been recorded internationally in human rights documents by the United Nations. The Universal Declaration of Human Rights, adopted in 1948, forms the basis of these documents.

The Universal Declaration of Human Rights proclaims the entitlement of everyone to equality before the law and to the enjoyment of human rights and fundamental freedoms without distinction of any kind and includes ‘sex’ as a ground in which human being are not to be discriminated against.”

He further pointed out that the International Covenant on Economic, Social and Cultural Rights and the International Covenant on Civil and Political Rights, both adopted by the UN in 1966, translates the principles of the Declaration into legally binding form and clearly states that the rights contained in each convention apply to all persons without distinction of any kind, including a person’s sex or gender.

“However, they do not create specific rights for women's lives. Instead, they offer women the opportunity to exercise, on the same basis as men, universally recognized human rights,” Maiava said.

He said that due to some social structures, traditions, stereotypical assumptions and attitudes about women and their role in society, women do not always have the same opportunity and ability to access and enforce their rights, on the same basis as men.

Some Samoans view human rights as a foreign concept that has no place in Samoan society.

“There is a misconception that the principle within human rights and fa’a Samoa conflict rather than mutually reinforce each other. The reason for this seems to stem from the Samoan translation of ‘human rights’.

“Some Samoans imply from the Samoan translation that ‘human rights’ means that individuals have the freedom to do anything they want without any limitations. This is simply not true. As the Ombudsman I have always been eager to highlight how international human rights and fa’a Samoa work together in protecting and promoting human rights in Samoa,” Maiava said.

He pointed out that gender-based violence as an example. “The Samoa Family Health and Safety Study found that 46.4% of women surveyed aged 15 to 49 reported experiencing physical and/ or emotional and/ or sexual violence by an intimate partner.

Yet, a survey conducted as part of the NHRI’s SHRR found that many participants felt that Fa’a Samoa and human rights conflicted in this area, with many citing that the Fa’a Samoa permits husbands to beat their wives.

“In its first human rights report which was submitted to the Parliament in 2015, the NHRI used the interweaving of fa’a Samoa and international human rights law to dispel this misconception and highlight the need to reverse the trend of high rates of gender-based violence within Samoan society.

He said this relationship also extends to unrelated males and females.

“Similarly, gender-based violence, which impairs or nullifies the enjoyment by women of human rights and fundamental freedoms, is protected under general international law as well as various human rights conventions.”

Considering that Samoan women are protected by principles and obligations under both international human rights law and the fa’asamoa, the high prevalence of violence against women in Samoa is intolerable from both a cultural standpoint as well as from a human rights perspective, he summarized.

Maiava concluded that it’s important to remember that while human rights are relatively new concept at the international level, the protection for women in Samoa has always existed within fa’asamoa.

“Fa’samoa principles and human rights therefore work together in protecting human rights for all Samoans, including Samoan women,” said Maiava.