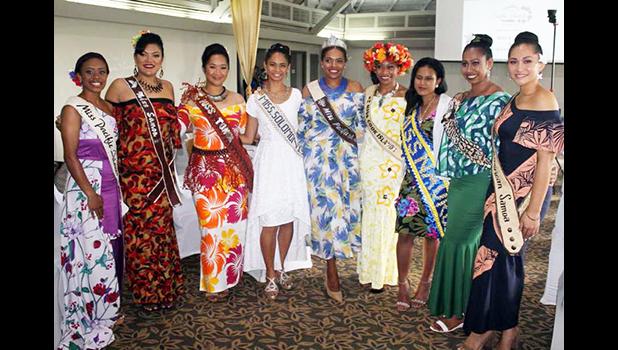 The 31st annual Miss Pacific Islands Pageant 2017 began with an official gathering in Nadi, Fiji the place where happiness meets you.

On the theme - ‘Climate Change Action to Sustain our Islands’, the nine Pacific beauties gathered and met for the first time at Novotel on Friday, 1st December
and were addressed by the Executive Director of the Miss Pacific Islands Pageant, and CEO of the Samoa Tourism Authority, Papali’i Sonja Hunter.

Papali’i acknowledged the reigning Miss Pacific Islands, Anne Dunn for her hard work in the past 12 months and congratulated her for completing her Bachelor of
Laws Degree and becoming a legal counsellor.

Other formal activities for the ladies include attending a church service on Sunday at the International Full Gospel Church in Nadi, and visits to tourism sites
and resorts. The judged events are spread throughout four nights of competition on the different categories of pre-Pageant Interview, opening performance and
introduction, sarong, traditionally inspired attire, stage interview and talent.The Pageant nights of competition will be from the 6th to the 9th of December,
2017 at Prince Charles Park.