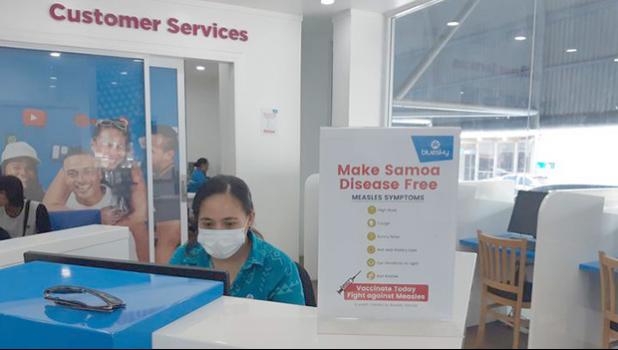 Apia, SAMOA — Strict visiting restrictions are in place at Samoa's hospitals and clinics in an effort to curb the spread of the highly infectious measles virus.

Taupou Tauvela, 28, was breastfeeding her 17-month baby Neoalina on an outside bench seat as she waited for her husband to seek treatment beyond the hospital's doors, along with a couple of dozen others in the shade of old hospital buildings.

A guard at a desk monitors the door questioning all who approach.

Not allowed in due to infection control of measles, she sat on the wooden bench with two members of another family, aged four and seven, also waiting while their mother visited a sick relative on the wards.

All were fully vaccinated accept 17-month Noelina, who has had just one of two doses needed for full measles protection. Taupou said she would take her baby to the immunisation clinic tomorrow.

Face masks are multiplying and now common place on the streets of Apia and in public areas as people act to protect themselves from the virus.

Nurses and hospital staff have all been warned against speaking to media but admit they are stressed as they keep to themselves near the hospital.

And some believe patients are being discharged from hospital early with the focus on measles cases drawing attention away from patients with other serious medical needs.

Many Samoans say they are not worried about measles because they are immunised, while others are outraged they can't get a booster shot due to babies being prioritised, and most say they are praying to God for the measles to spare them.

Two young children and a 37-year-old man recently died in Samoa, after clinical signs indicated they had measles.

Meanwhile, new global research has revealed the virus is even more dangerous than first realised because it destroys immunity to other diseases.

The findings from studies by Britain's Wellcome Sanger Institute, Cambridge University and the Howard Hughes Medical Institute in the US, help to explain why children often catch other infectious diseases after having measles.

The Government of Samoa Ministry of Health yesterday issued a followup of their “Measles Prevention” public notice sent out last week, advising that they are continuing to reinforce the immediate closure of all pre-schools and child daycare facilities “to further prevent the spread of measles among infants and young children.”

The Health Ministry with the Ministry of Education, Sports and Culture, also say they are “working in close partnership to monitor the early closure of Primary Schools” on Nov. 15, 2019, as well as Senior schools and colleges at the end of this month.

“It is also advised that all schools (preschool, primary and secondary levels) avoid end of year prize giving and graduations to restrict mass gatherings and going to public places,” the public notice says.