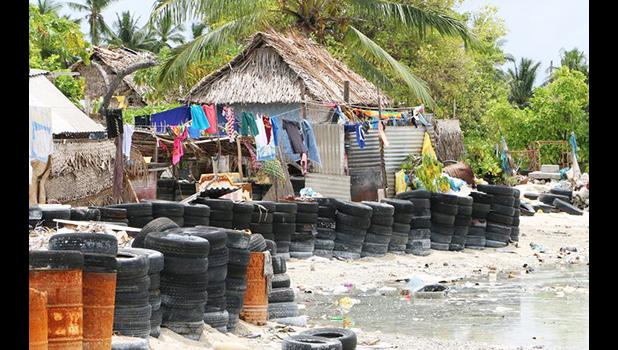 Majuro, MARSHALL ISLANDS — The Marshall Islands has issued a plea for help and a call to action at the US Leaders Summit on Climate Change.

Addressing the virtual meeting on Friday, President David Kabua laid out the existential threat facing his country and the Pacific.

Kabua is the lone Pacific leader invited by US President Joe Biden to the two-day talks.

Kabua shared the stage with the world's biggest economies and pressured those he said held the Pacific's future in their hands.

President Kabua said there were a series of island nations already feeling the effects of rising oceans.

He said the Pacific now faced an even greater threat.

"We are low-lying atoll nations, barely a metre above sea level," he said.

"For millennia, our people have navigated between our islands to build thriving communities and cultures.

"Today, we are navigating through the storm of climate change, determined to do our part to steer the world to safety."

Kabua told the leaders their actions had a direct bearing upon the future of the Marshall Islands and others in the Pacific and beyond.

He called for stronger emission targets, a carbon levy to help the most vulnerable and for 50 percent of climate financing to go towards adapting to the devastating effects of climate change.

Kabua said the Marshall Islands, with AOSIS, fought for years to create consensus around a 1.5 degrees Celsius temperature goal.

"In 2015, we brought together the High Ambition Coalition to turn the 1.5 to stay alive rallying cry into a goal shared by all parties to the Paris Agreement."

The role of the coalition is even more important today to ensure that 1.5 remains in reach, Kabua said.

He said the coalition's key task this year was to ensure that updated national emissions commitments were in line with that goal.

"NCDs are where ambition moves from promise to plan. Given how far off-track the world is today, it is vital that we come together every five years to increase ambition.

"All nations should also be charting long-term net zero strategies and implementation pathways before COP26 in the UK in November."

Too often, vulnerable countries hear the excuse that steep emissions cuts are too costly, Kabua said.

But he added political signals, especially from the major economies, shaped decisions on investment and innovations for low-carbon pathways.

The Marshall Islands leader said the recovery from Covid-19 gave the country a rare chance to invest in a safer and healthier world.

Kabua said now was the moment for this signal to be unequivocal: the recovery from Covid-19 gave the Pacific a rare chance to invest in a safer and healthier world.

Sector-wide transformations were possible, he said.

"Together with the Solomon Islands, we are pushing for stronger emissions action at the IMO through a carbon levy to fund research and help the most vulnerable.

"Leading from the front-lines, we were the first to strengthen our NDCs in 2018. And we have a 2050 net-zero strategy paired with an electricity roadmap as our implementation pathway.

"We recently celebrated the success of the Micronesia Challenge and will be joining the Local2030 Islands Network."

But the President said all this would not be enough if the big emitters failed to act.

We feel the effects of climate change now, he said, and so the Marshalls is leading the way on adaptation.

"Adequate and accessible financing is key. And so I support the call for 50 percent of climate financing to go towards adaptation."

Support for the world's developing and worst-affected nations was a common theme at the virtual summit.

The issue was raised repeatedly by Biden and leaders from India, China, Germany, the EU and others.

Australian Prime Minister Scott Morrison said his country was providing $US1.5 billion in "practical climate finance, focusing on the blue Pacific family partners in our region".

Morrison's New Zealand counterpart Jacinda Ardern opened her address to the summit by saying her country's "Pacific neighbours have identified climate change is the single biggest threat to their livelihoods, security and well being".

"Our collective goal here at this summit and beyond has to be effective global action on climate change," Ardern said.

"That means our collective commitments in 2021 will need to be enough to limit global warming to 1.5 degrees above pre-industrial temperatures."

However, Biden delivered new pledges, saying the US would double climate funding help for less wealthy countries by 2024.

That cost would be more than made up for when "disasters and conflicts are avoided," he said.

For the Marshall Islands and President David Kabua, it's not what the world is going to do to address the climate crisis but more when.

"I'll conclude by asking my fellow leaders, how will you move from plans to implementation to align with a 1.5 degree future and help others do the same?

"Your answer will define the future for your children and grandchildren, and for mine."